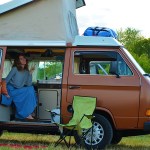 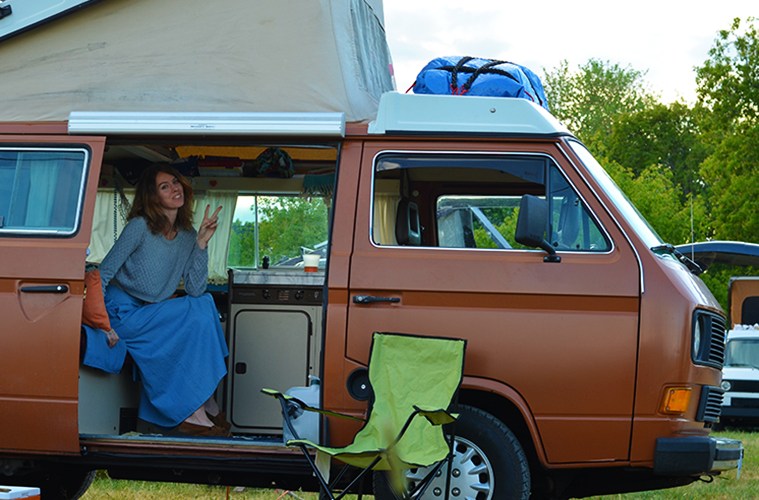 Last weekend we attended BusFusion, the Canadian It event for VW bus and van enthusiasts. Here’s a little slice of what it was like.

There are over 220 VW vans, mostly Westfalias, parked in the Almonte Fairgrounds near Ottawa, the Canadian capital. It looks like a small Woodstock, only the vans are fitted with modern Thule cargo carriers and solar panels, and expensive contemporary lawn furniture and colourful awnings stretching out from the sliding doors like portable front porches, complete with a gas grill, area rug, and just as often as not, a couple of dogs and/or kids.

This is BusFusion, and these are the Van People of 2016. 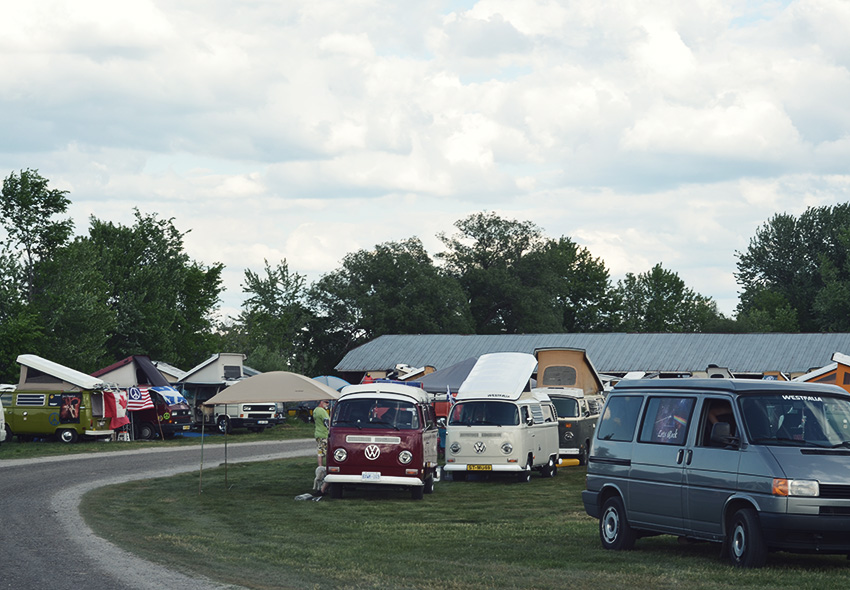 The few non-VW vehicles on the grounds stick out like these machines normally do in parking lots full of Toyota Corollas and Ford Foci. According to the 15-year-old organization’s site, you just have to have attended the get together in a VW van (and show proof) at some point to get on site. So there are a couple of misfits, like a lone Dodge Xplorer, that we see. 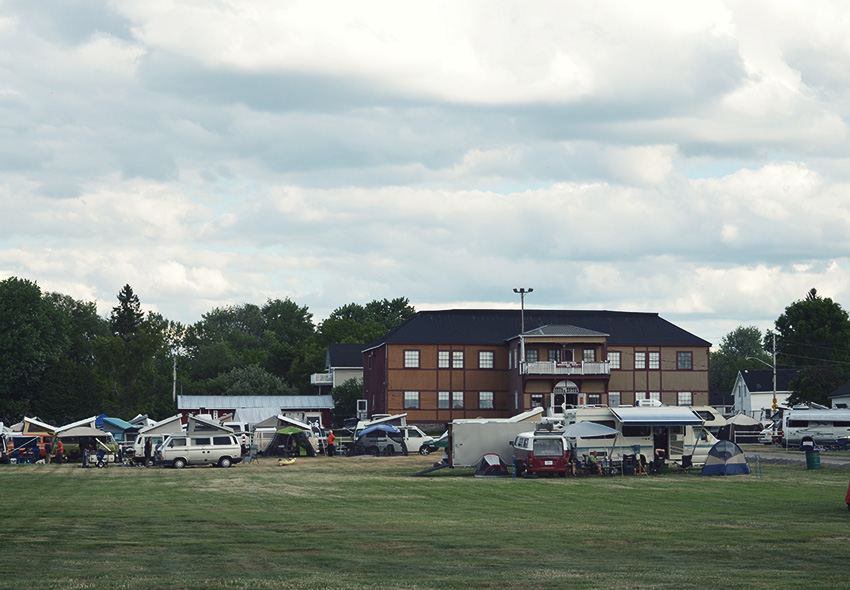 A shot from Friday night before many more vans showed up on Saturday.

The invitation came courtesy of a few members of the community: a VW mechanic from Nova Scotia (Jeff of Jeff’s Old Volks Home) we’d connected with online, and a some kind and eloquent stranger who left a note on our windshield in nearby Brockville, Ontario, a few days before (sorry we never got to meet you Lisette and Kurt).

Came back to our van after clocking a handful of hours at Tait’s bakery in downtown #Brockville to find this: a charming note from fellow #westfalia owners. The #vanlife community is so so awesome already. Lisette and Kurt, we’ll see you in Almonte this weekend for #busfusion! ? #tinyhomemovement #vanlife

The crowd here is part hippy, part motorhead, part collector, part gypsy, and part something else entirely. It’s an interesting demo. There’s plenty of french Canadian wafting through the airwaves, and even a few American plates. Van life, it seems, attracts all kinds, even digital nomads like us. 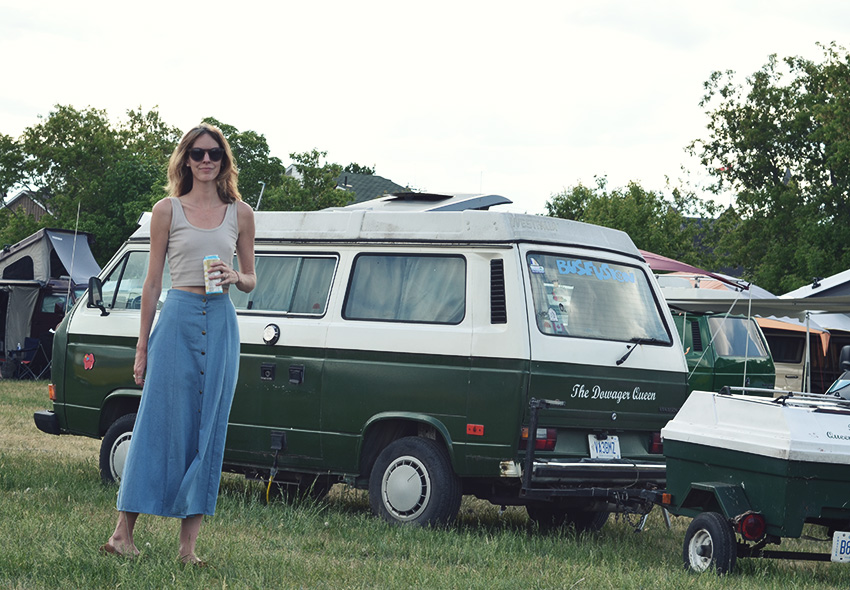 We were among the younger owners on the grounds, but there were some 20-somethings, and many children and grand children running around. 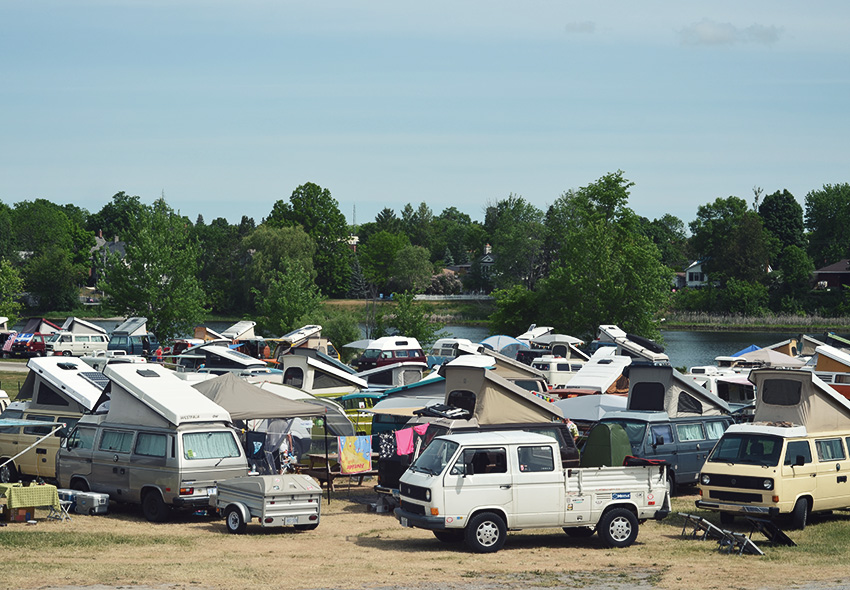 A gaggle (or is it just a group?) of vans by the river.

@Netcruzer captured this epic drone footage of the event. Can you spot the Li et Co van in the first frame? (If you look closely as it flies over the beach, you’ll catch us lounging on a blue blanket with our new pal Shane and his son.)

Our burnt orange (VW calls it Assuan Brown, which sounds totally yucky) 1983 with our few modest aesthetic mods and ready-to-drop original engine is somewhere just below the median here in terms of quality. The vans run the gambit from touched-up original like ours, to rusty triple-toners, to totally remodelled/remastered/rewhatever classics worth at least five times what ours is. 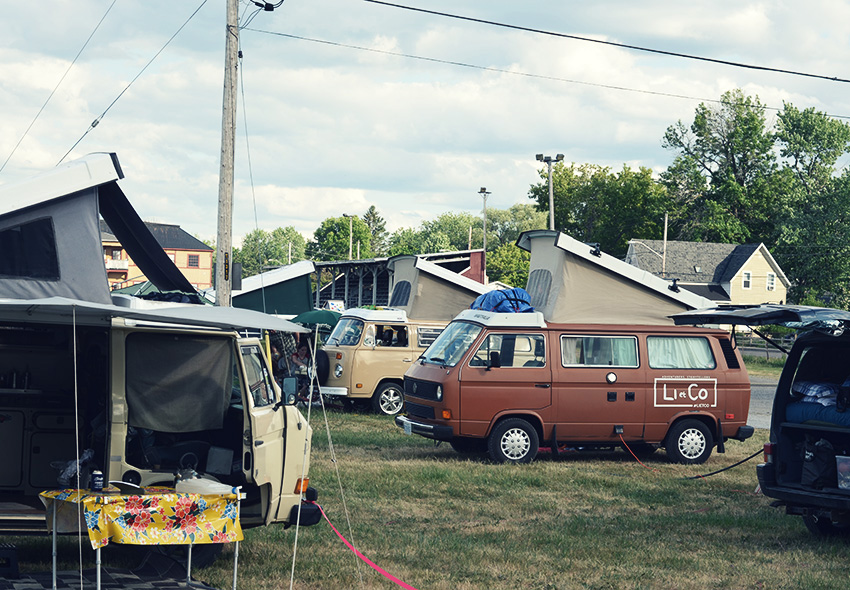 Our modest ’83 Westy with Li et Co decals, of course. 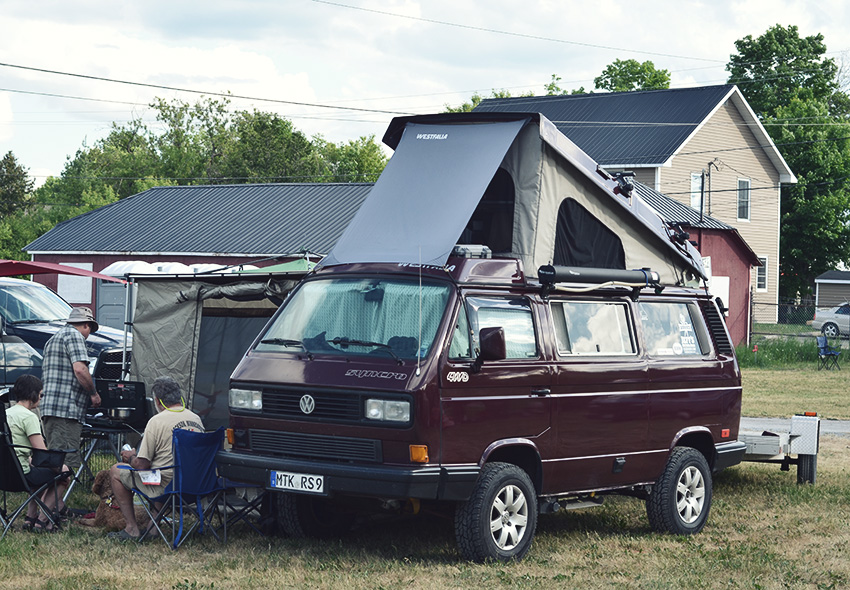 They even had the Brew Bus Lounge on site, with the owners/tenders Dan and Dan slinging cream ale and amber ale from the Ashton Brewing Company Brewery, which is owned by Art Hodgins, another Westfalia owner and weekend attendee. (We VW owners like to keep it in the family.) 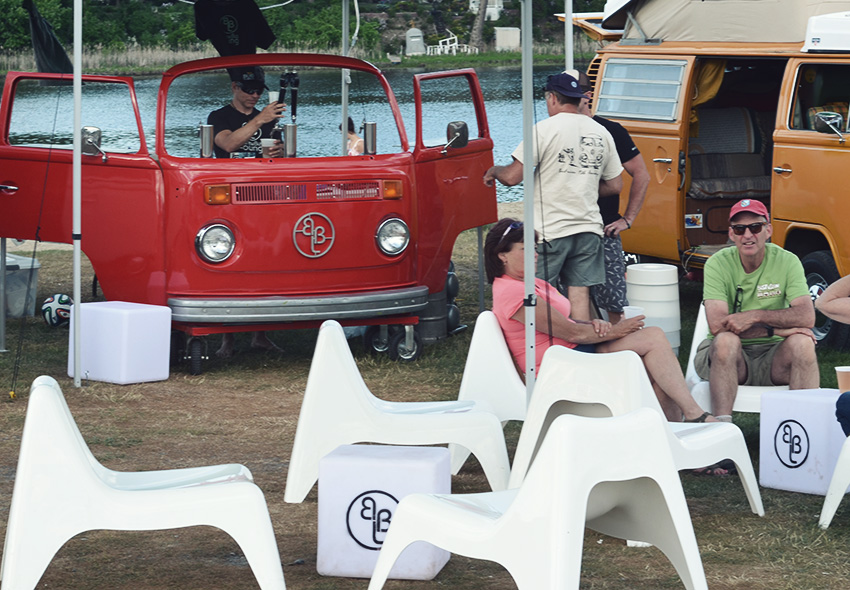 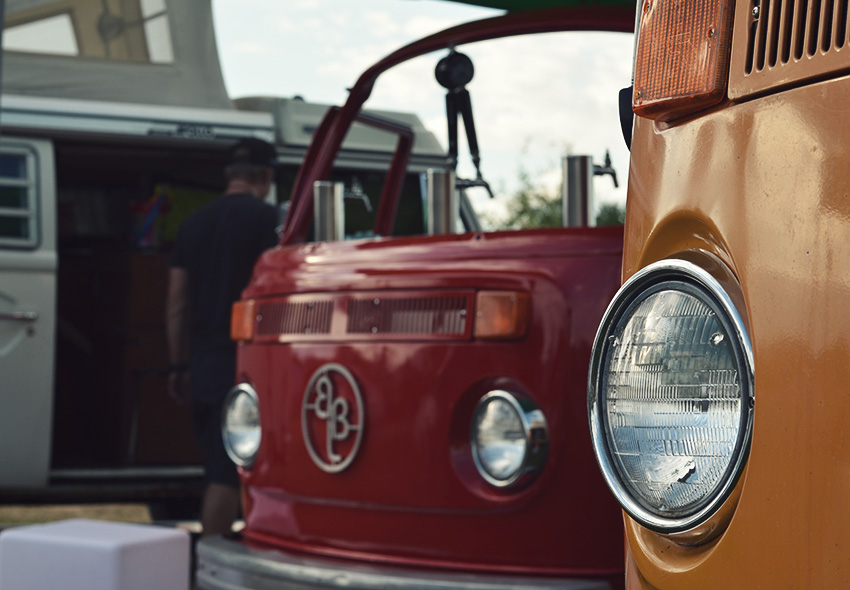 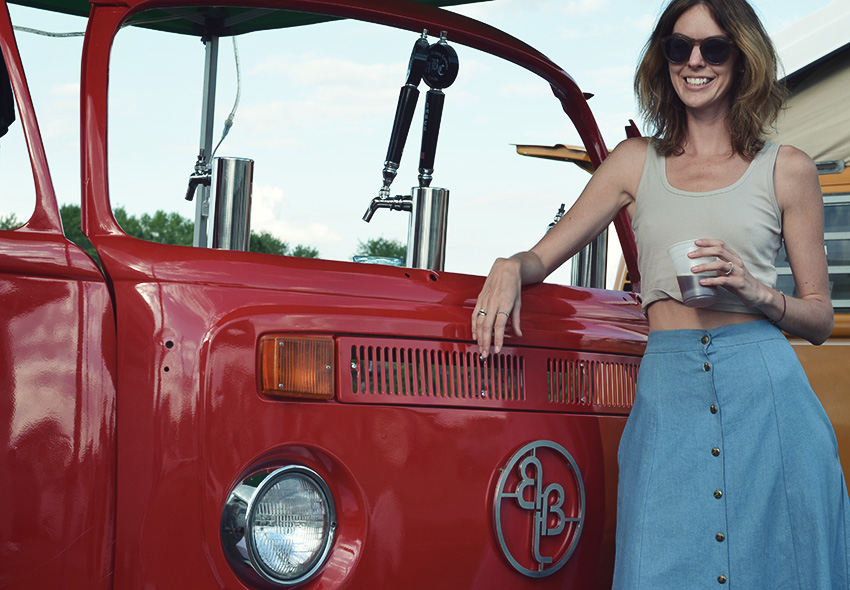 Lisa enjoying a cold one at the Brew Bus.

On Saturday morning, there was a Swap and Sell, where attendees could sell and trade parts and accessories for their rigs. A set of mirrors that we had been lugging around under our bench seat were happily accepted by Art from Ashton Brewing. (Hope you’re putting those things to good use, Art.) 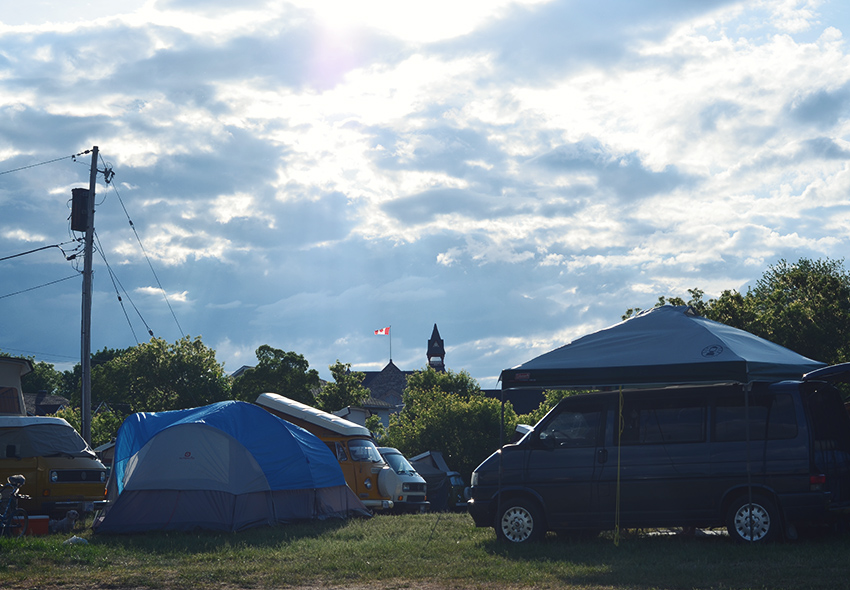 In the evening, each van that dotted the sprawling field lit up one by one like a firefly waking up for the night. After sunset on Saturday, bands played in the registration hall after a communal meal (both of which we missed, opting for an early night tucked away in our cozy lower bunk instead). 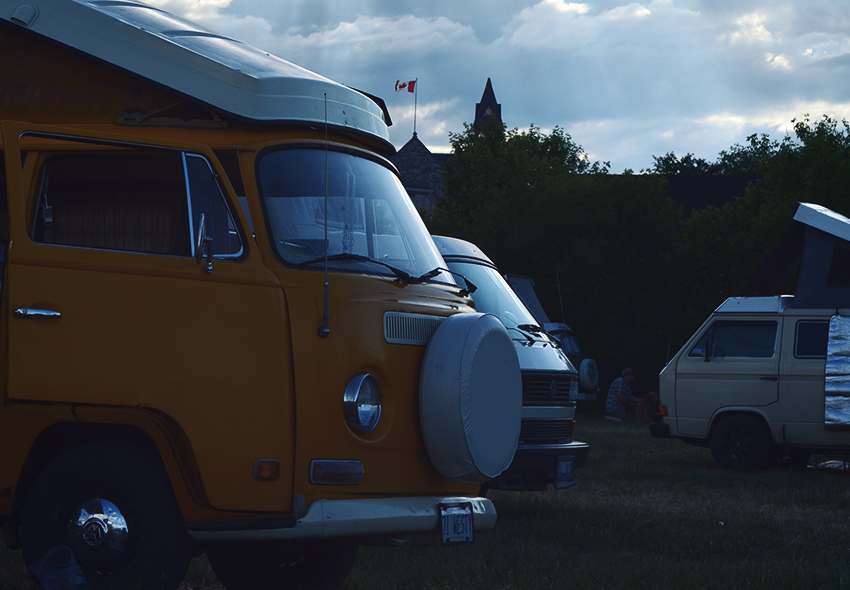 We left the event with an increased appreciation for our new home, some great ideas for mods, and a bunch of new friends. If you own a VW van, have owned one, or are thinking about getting one, check out BusFusion.

Because whether you like it or not, if you’re a VW van owner, you’re part of the van fam. Now bring it in here for a hug, would ya?