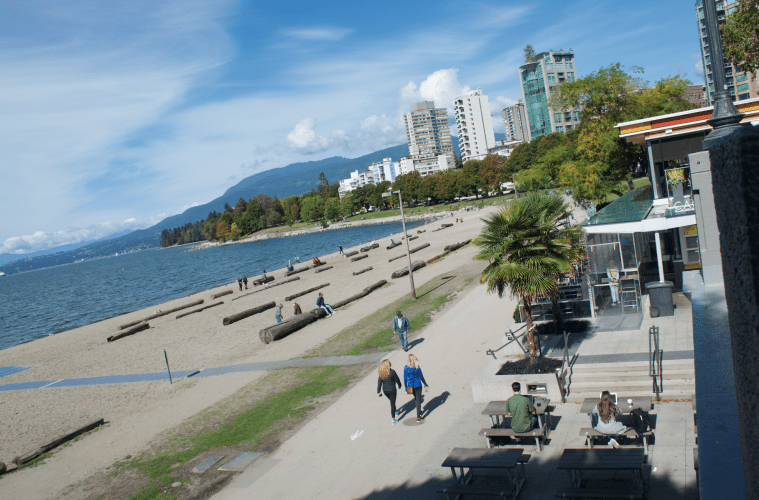 The best places for remote working in Vancouver

Not having to report to an office daily has its benefits and its challenges. Lisa and I definitely miss the camaraderie of working with the same group of coworkers in the same building every day, for example. Where do you go for a coffee break if you’ve already been at there for the last four hours? Another coffee shop? And who do you gossip around the water cooler with if everyone else in the room is a stranger?

Aside from being that guy who lurks by the public water fountain and starts up conversations with unsuspecting thirsty people, we’re admittedly still working that part out. The flip side to this problem is that I’m free to go wherever I want to work.

Since landing in Vancouver last year, we’ve spent thousands of hours behind our laptops in various cafes, libraries, public spaces and even on some beaches. There’s free Wifi in them hills, and we know where to get it! Technically, the entire city is blanketed in free wifi, which isn’t much of a secret–here are some instructions on how to log onto Shaw’s complimentary #VanWifi–but it’s not always the most reliable, so we’ve been building our rolodex of inspiring, and welcoming places crank off some emails or whatever’s on your digital to-do list.

Because these are my personal go-to places to work in Vancouver, most of the locations including hipster cafes, non-hipster cafes, beaches and other random public places, are mostly in and around downtown and the West End where we live. That being said, we’d love to hear suggestions for any other great places to work from anywhere around Vancouver, so if you’ve got some please throw a link in the comments. Extra Bonus Points for any beach or park locations with good Wifi. 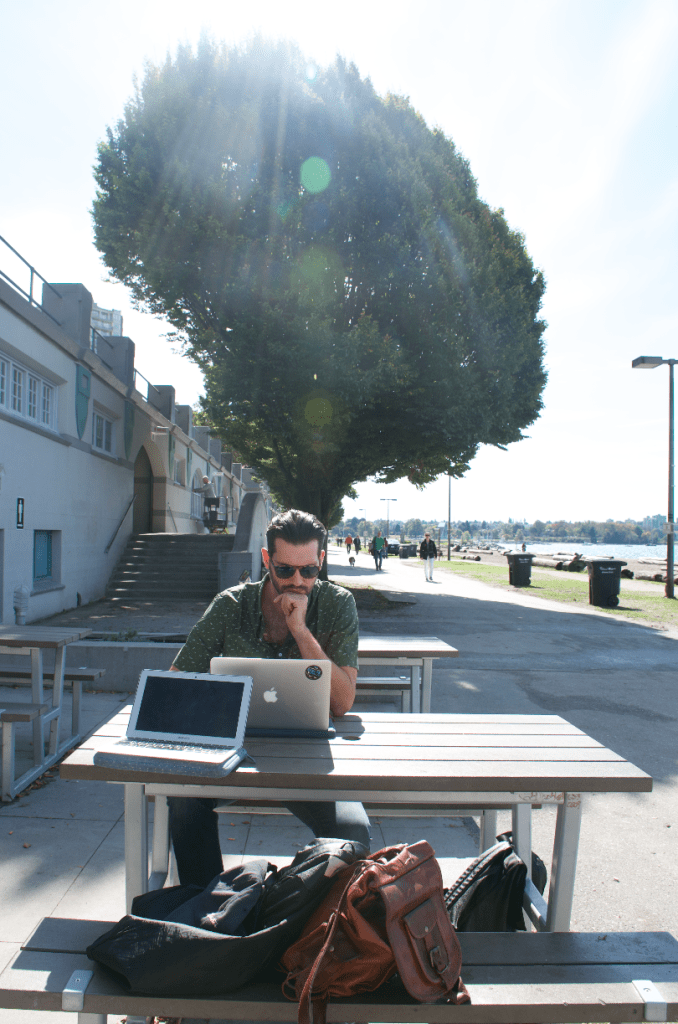 Our West End neighbourhood doesn’t have a lot in the way of independent coffee shops, but you don’t have to go far to find them. Over on Main St., Kafka provides a little haven for laptop-bound hipsters with minimal but neat decor, quality teas and coffees, and cool but unpretentious service. I’ll admit it, basically everyone in here looks like some version of us. Lots of beards, Blundstones and MacBooks. We feel right at home.

Another place to wear your thrifted overalls and wireframe glasses, Chinatown’s Propaganda is low key and laptop friendly, offering a simple menu of filtered coffee and espresso alongside some basic treats like muffins and cookies. Solid Wifi, fascinating people watching and a creative vibe keep us coming back. That and the free sparkling water on tap. WHAT?!?!?!

Prado has a handful of locations in Vancouver, but we frequented the space on Hastings and Abbott. They put out quality food and coffee, the latter of which is from iconic local roaster 49th Parallel coffee (see below), so this is definitely a place you can head to in the morning, stay for lunch and then work a little in the afternoon.

Beware! You will probably not make it by the donut display in 49th Parallel unscathed. Just embrace it. This Vancouver institution serves coffee, food and possibly the best donuts in the city. They’ve got locations on Main, West 4th and Thurlow downtown. We love the house-made almond milk but don’t love the fact that they’ve sealed off the outlets so you can’t charge a laptop (at the West 4th location at least). It’s busy, so go in the off hours and bring a full charge.

Walk by Breka Bakery and Cafe on Bute at any hour of the day, any day of the year, and you WILL see a bunch of people eating, drinking, working and chatting. This place is ALWAYS packed, usually with a diverse crowd, and it’s pretty easy to see why. It’s got great natural light and windows that look out over the pedestrian-only section of Bute St right off Robson and serves cheap hot drinks and baked goods 24-hours. If we’re ever chasing a deadline early or late in the day, we often end up here (also if we want a cheap pastry treat). They’ve got lots of seating inside as well as an outdoor patio with overhead heaters.

Starbs in English Bay at Davie and Denman

Look, before you scroll down to the comments section to tell me what a hack idiot I am for putting Starbucks on a list of best places to work from in Vancouver, take a quick read of this post we wrote about why we love Starbucks as vanlifers. Regardless of how you feel about the brand–and aside from some unfortunate racially charged headlines earlier this year--Starbucks is famous for its hospitality and consistent Wifi. Staff are kind and welcoming and, in this location, the window seats offer some of the best coffee-shop lookouts in Van, with sweeping views of English Bay.

Canada has some amazing libraries and we’ve worked at a fair number of them over the last few years. The Halifax library’s gorgeous, criss-crossing staircases and rooftop patio stand out, as does the cavernous hall at the Toronto Reference Library. But if you’re listing Canada’s top libraries, you’ve gotta include Vancouver’s Central Library. It’s an architectural marvel with a beautiful courtyard in front and behind (with a cool pub just off the rear), and a brand new rooftop patio.

We like south-facing window seats on the fourth and fifth floors. They’re semi-private, provide some nice views of the city and get great afternoon sun. When you need peace and quiet for absolute focus, head here. 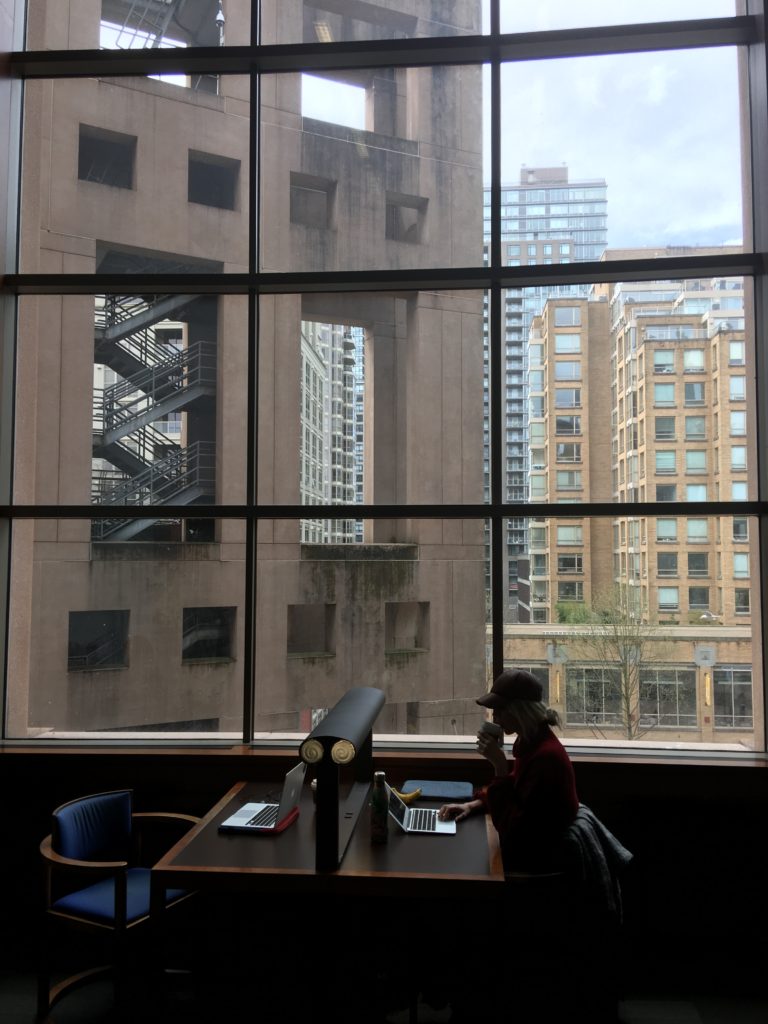 If the sun is shining and the temperature is above 20 degrees Celsius, we’ll often pack our laptops in our bags and bike along the seawall to one of our secret public working spots. OK, it’s not that secret. There’s a small group of picnic tables just beside the Cactus Club along the seawall at English Bay that will often have a number of laptop workers happily plucking away at their keyboards while looking out over the Pacific Ocean. I assume they’re piggybacking on the Cactus Club’s free wifi, because we are–it even reaches to the first few rows of logs on the beach.

If those spots are taken, there’s another few benches across from the old Sylvia Hotel just down the path that receive signal from the Sylvia’s bar/restaurant. For the price of a pint the password could be yours too.

A recent trip to the passport office led me to discover this beautifully lit atrium inside the luxury shopping destination of St Clair Centre. Wireless internet, skylights, high ceilings and plenty of people in suits will remind you why you prioritize your professional freedom. 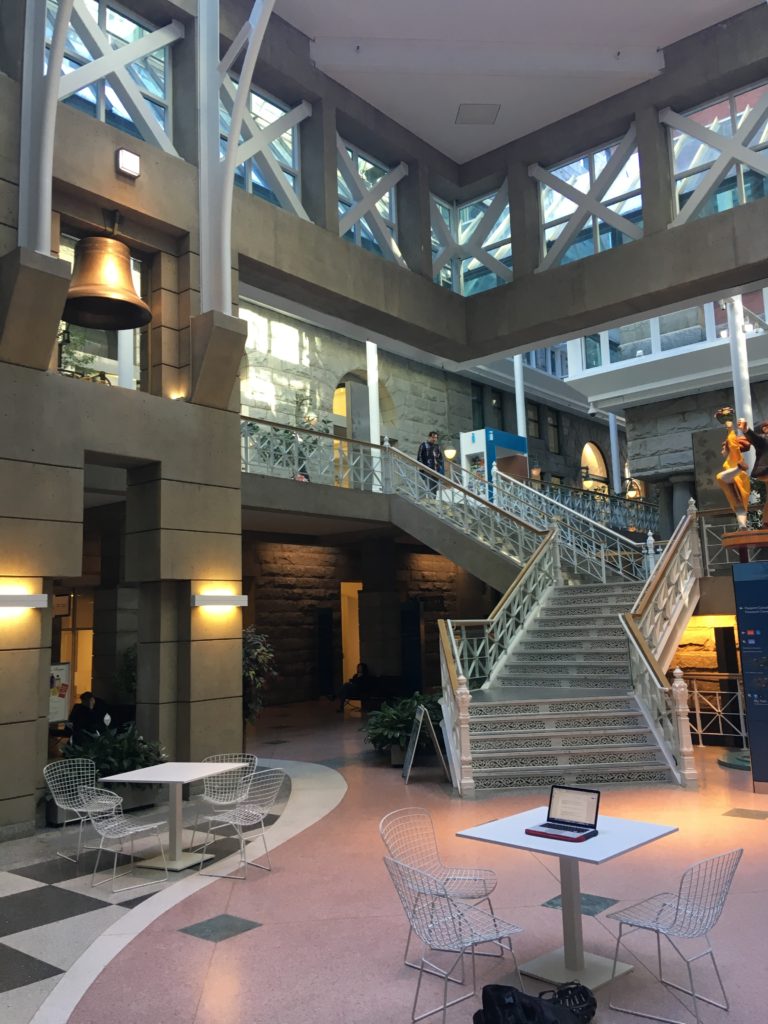 Right in the heart of Vancouver’s gay community, Jim Deva Plaza on Davie at the foot of Bute Street is always lively. There are a couple of Wifi options including the free #telus, the aforementioed #Vanwifi network and a couple of neighbouring coffee shops that you can poach off of if you’re willing to spend on a coffee. On days when it’s raining, I’ll frequent the Blenz coffee shop across the street, which has a covered patio, its own wifi and super friendly staff.