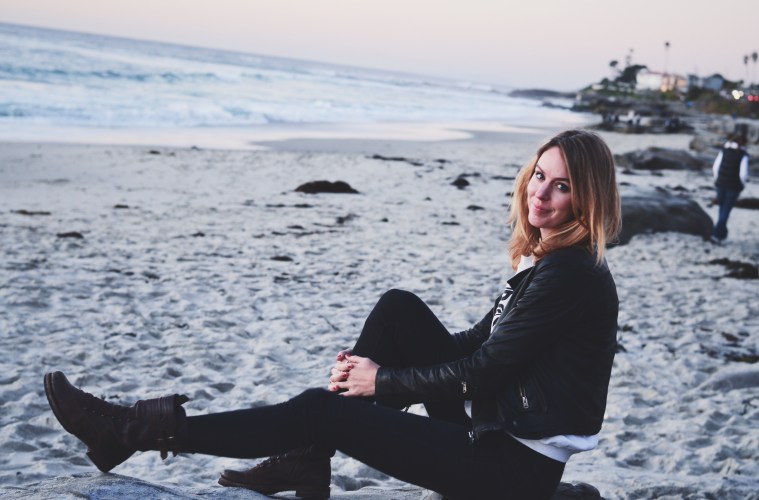 The chocolate brown micro-suede couch I’m curled up on has engulfed my body in a warm, sofa-y hug. It’s cushy, comfortable. Despite being Saturday night in San Diego, a new city that I want to spend every waking second exploring, I’m content; Coleman’s across the apartment in the kitchen making something delicious that involves chicken, rice and beans, olives, avocado, onion, cucumber, and tomato—a Greek salad, if I’m lucky. His iPhone is inside of a glass cup to amplify the sound of his PNR podcast.

It’s been a long while since I sat on a couch (that isn’t a bench seat in a van), which I didn’t realize until we moved into Alice’s place on the first of the month. It’s a comfort I’ve missed. 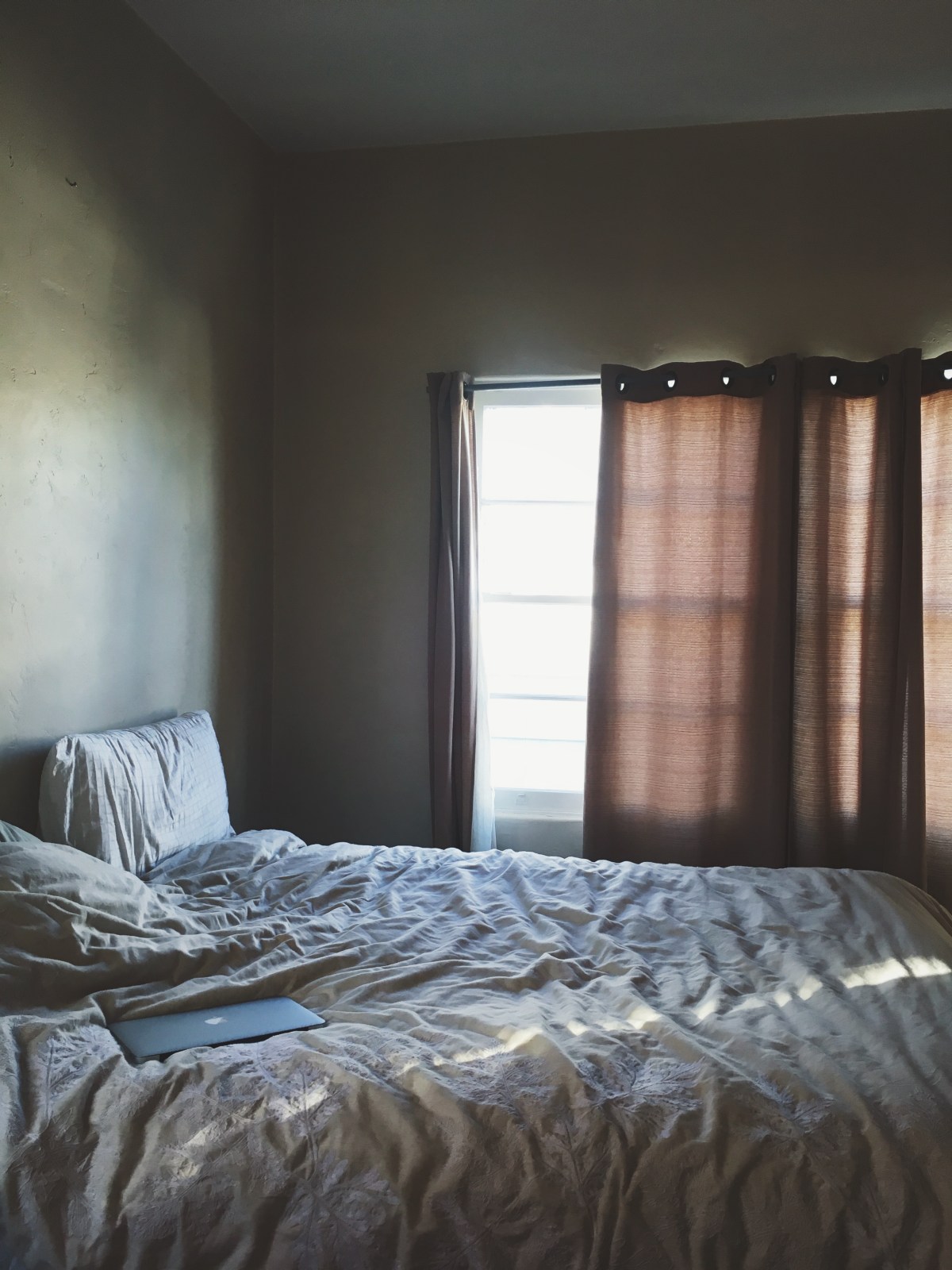 This bed has been a bit comfier than our van. And doesn’t smell like oil either.

The other thing I like about this couch is the view. I can see the ocean from where I’m settled. Our temporary bedroom—which is tucked in a charming second floor apartment with loads of windows to let the California sun shine through—has similar views. 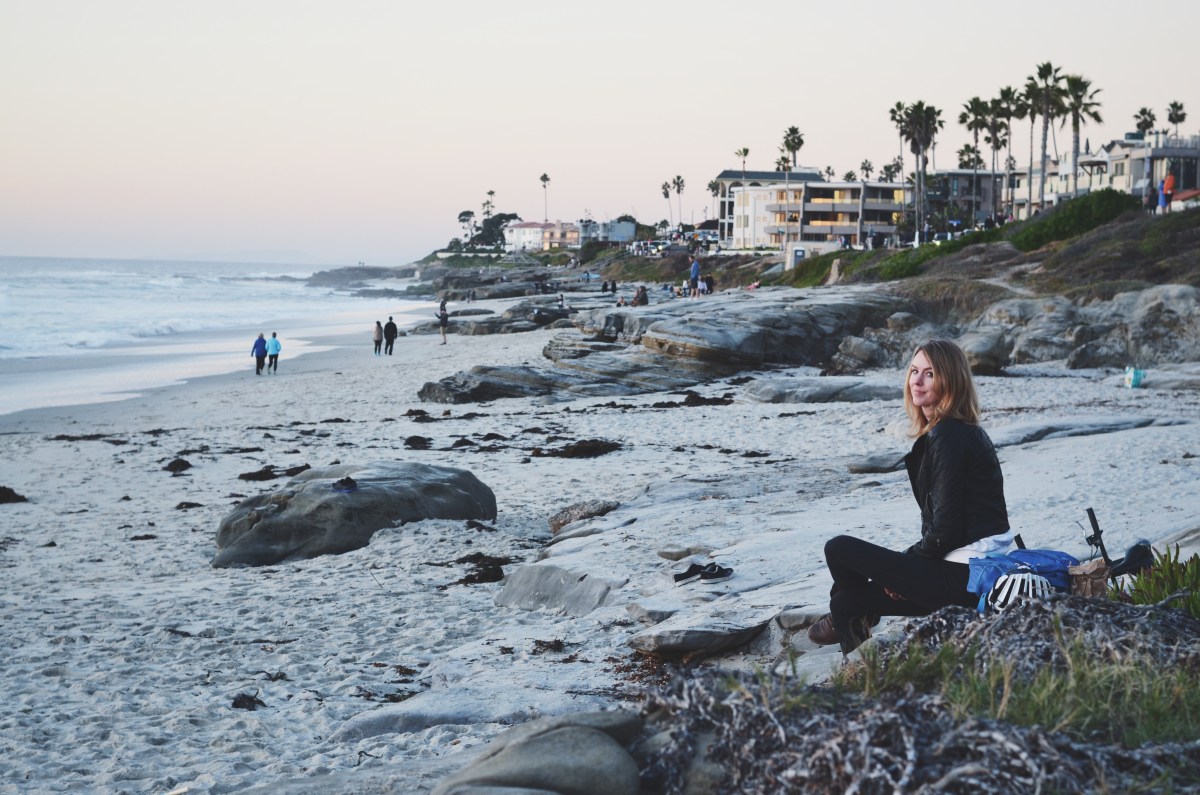 After an evening bike ride, we headed to Windansea Beach in La Jolla to watch the sunset.

And I can hear the waves crash on the Windandsea Beach shore. We are, after all, just two blocks from the water. For the first few nights, I thought the wind was making all that fuss outside. But when I looked out the window at the long, lean palms that line our street, they’re standing pin straight. There is no breeze. That crashing is the ocean.

It’s hard to believe that it was just one week ago when I felt homeless and hopeless in Mission Bay (15 minutes from where I am now). But, I’ve found my groove in La Jolla, a dreamy waterfront stretch of community in San Diego. There are endless green spaces, beaches, and benches, all for public use along the shore. Cafes and pubs and shops galore. Do people really get to live like all year-round? I’ve found myself asking. I’m mixed with jealousy—I’ve been missing out on this way of life for 32 years!?—and gratitude—it’s okay, self, you’re here now, and it is epic. 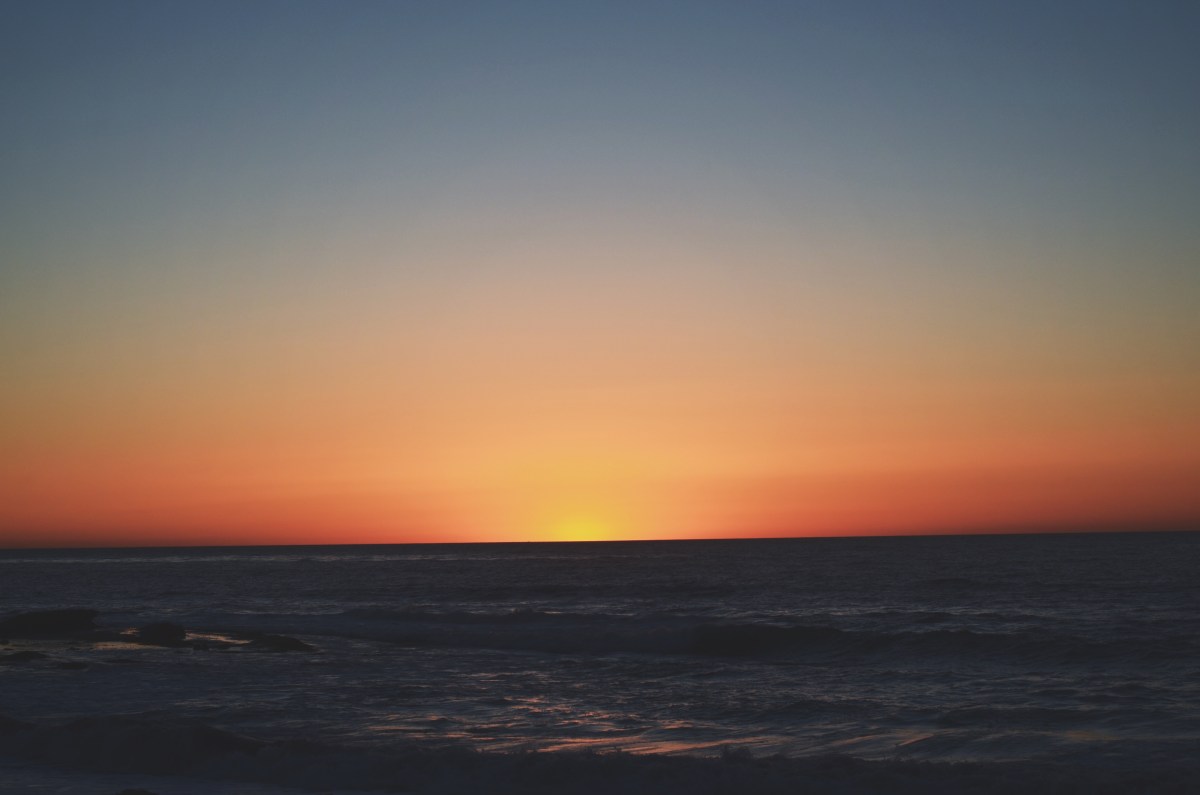 A December sunset at Windansea Beach in La Jolla, California.

While being curled up on this couch is all kinds of comfortable, getting back into my regular running routine has also helped me to find my groove. The act of running is a comfort in itself. When my internal alarm clock nudges me awake just after six thirty, all I want to do is lace up my trainers and get outside; the sunshine, clear blue skies, and ocean views await. 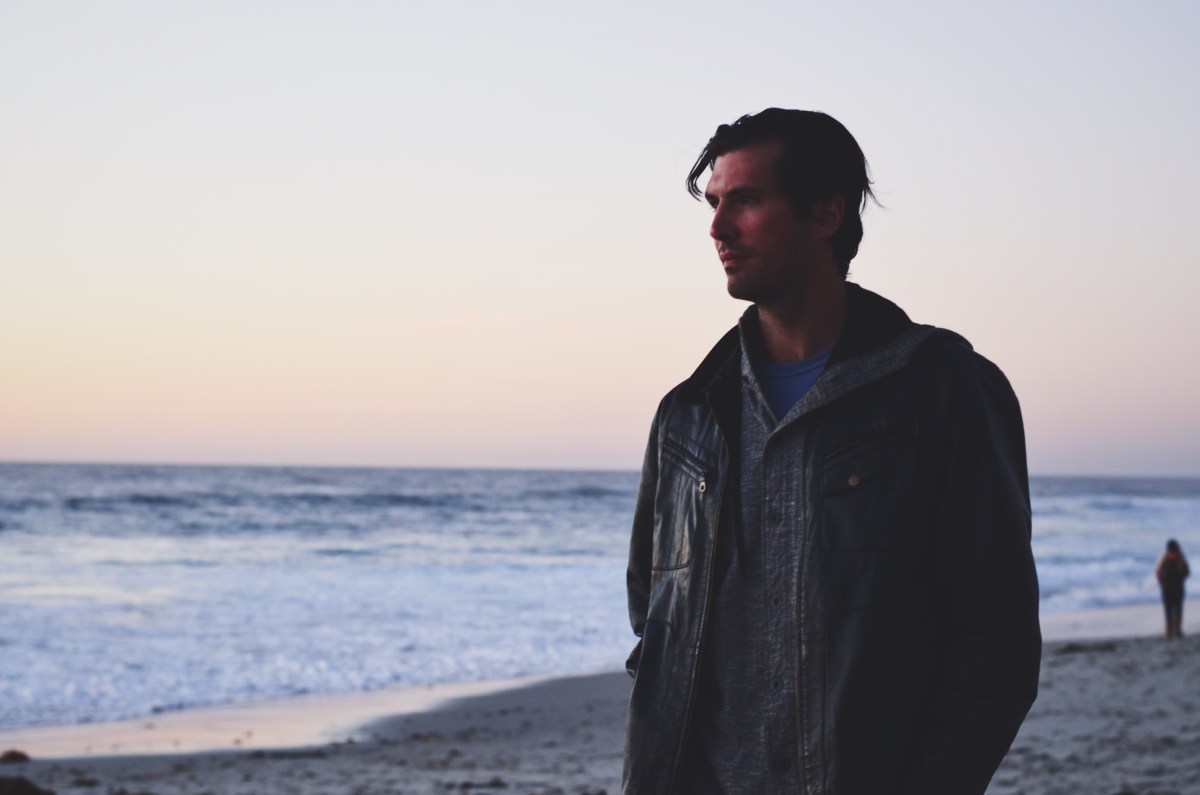 The Old (Handsome) Man and the Sea.

I’ve also felt more productive work wise. I’m uncovering new (to me) coffee shops, all with decent wifi and full of digital nomad like myself, laptop open and earphones in. This has added to my sense of belonging. I’m motivated, focused. Also, I like to imagine one day living in some ocean side home (like the ones I’ve been running by), and typing that goal—farfetched as it may be—is enough to kick my ass into gear. 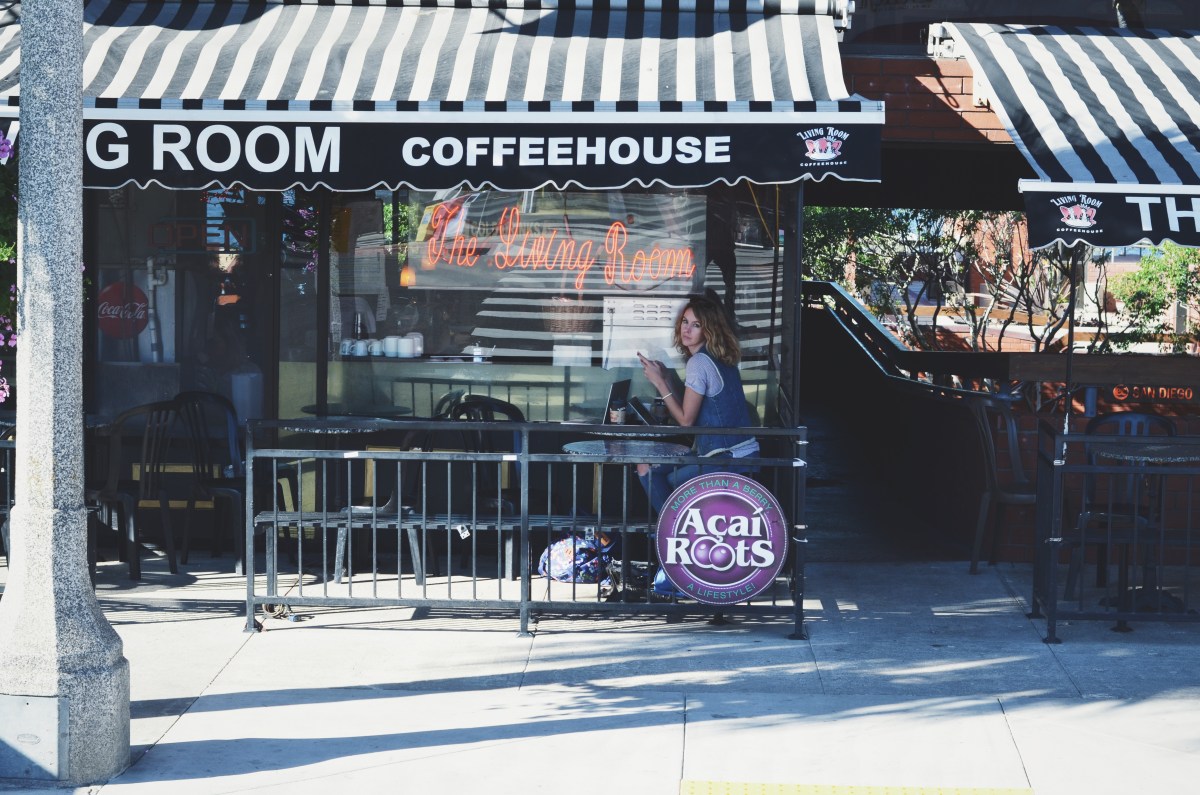 This isn’t all to say that van isn’t comfortable. It’s cozy and we’ve made it homey; I’m looking forward to moving back into our rig mid-month and continuing to work and explore and build our business. But this week I’ve done some serious self discovery: a bit of structure is really important to how I work and function. And a bathroom running water isn’t bad either.