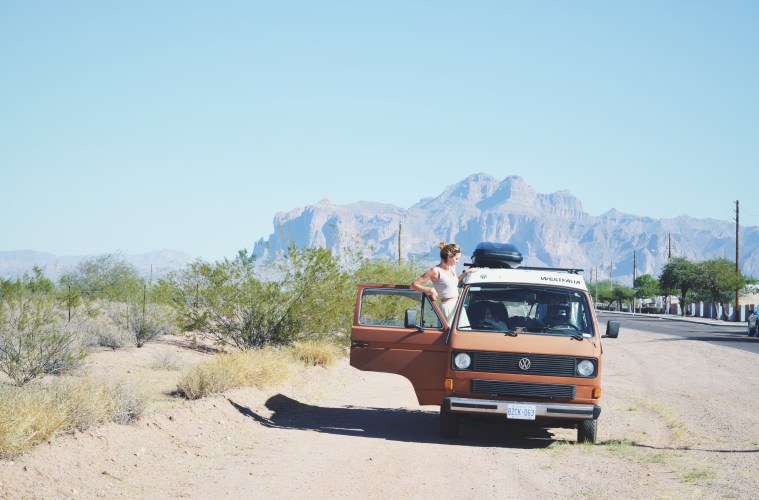 The van smells like old fish. And since we haven’t cooked anything from the sea inside our rig in months, it must be coming from one of the Phoenix burbs we’re currently driving through. Honestly, it’s pretty repulsive, even with both of our windows rolled down and warm November desert air blowing about.

We’re leaving Apache Junction where we actually just lost a week. Lost in a good way.

After spending 10 days in Carefree, Arizona (30 minutes north of Scottsdale) with friends, where we lived in a spacious casita with our own king-sized bed, terrace, shower, and—praise the porcelain lord—toilet, we were thrust back into van life on Monday morning. Hello, 80-square-foot living quarters. I was anxious of the unknown, anxious to generate more business, and honestly, anxious about failing. It was the first time since we’d left Toronto back in May that we had literally no specific place to be, project to complete, or friends to visit. The 33-year-old walls of our Westfalia were immediately suffocating and small the second I sat down in the passenger seat and closed the clunky metal door. My chest felt tight as Coleman put the key in the ignition and the engine rumbled to life—on the second try.

The 33-year-old walls of our Westfalia were immediately suffocating and small the second I sat down in the passenger seat and closed the clunky metal door.

The night before, we’d opened a map and Coleman waved his finger above it like a magic wand, haphazardly picking a place called Apache Junction. I liked the sound of it—the word “junction” reminded me of Toronto’s west end. Plus, it had a KOA campground with wifi and a pool, hot tub, ping pong tables, and laundry, and there was a Starbucks—our most frequented “office” space these days—within biking distance. We’ll ease ourselves back into van living, we decided. 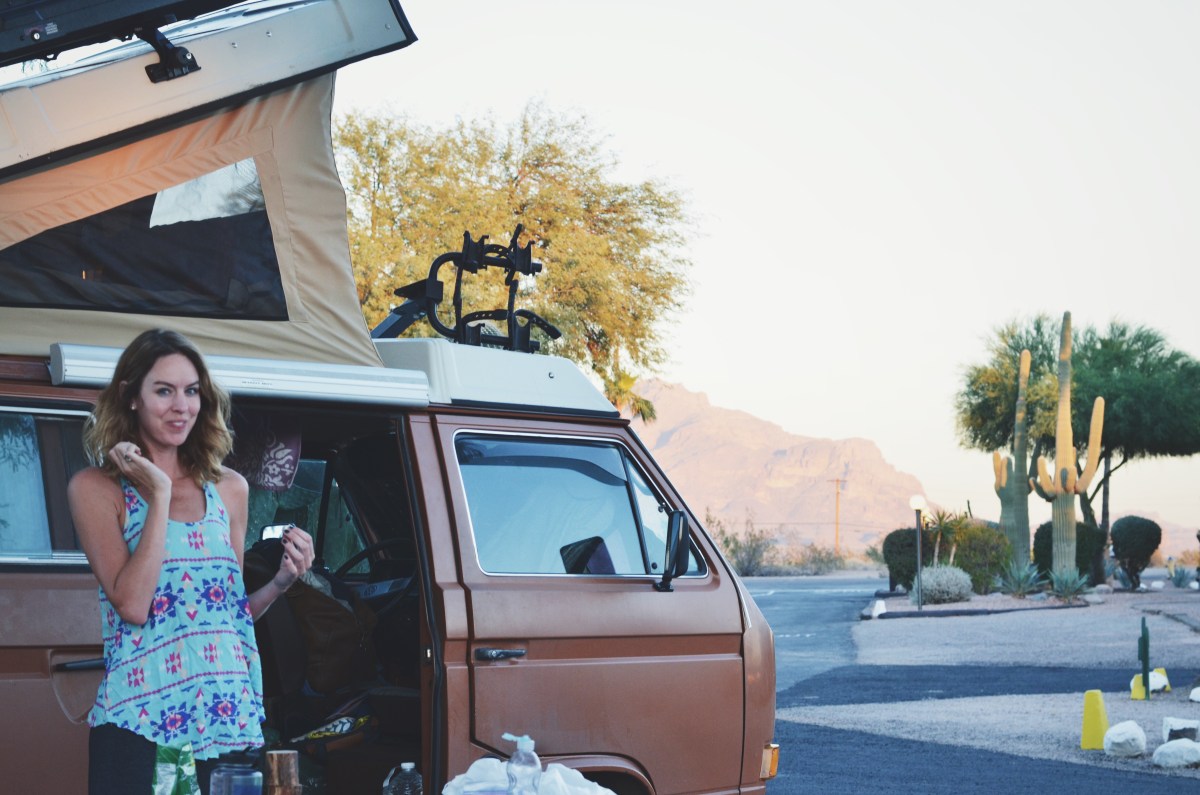 Me, putting on a brave face at our Apache Junction KOA site.

At our site, the internet connection was like 1998, and on our second morning, we saddled up after an am run and breakfast of eggs and corn tortillas, bound for our go-to corporate coffee chain. Coleman’s bike tire was flat, so we took just one whip; me perched on the handle bars laughing like the school kids we rode by, pleading for Coleman, who was manning the peddles, not to hop the curb with both of us on board. (He didn’t, mom and dad.) Warm, free, and glorious. 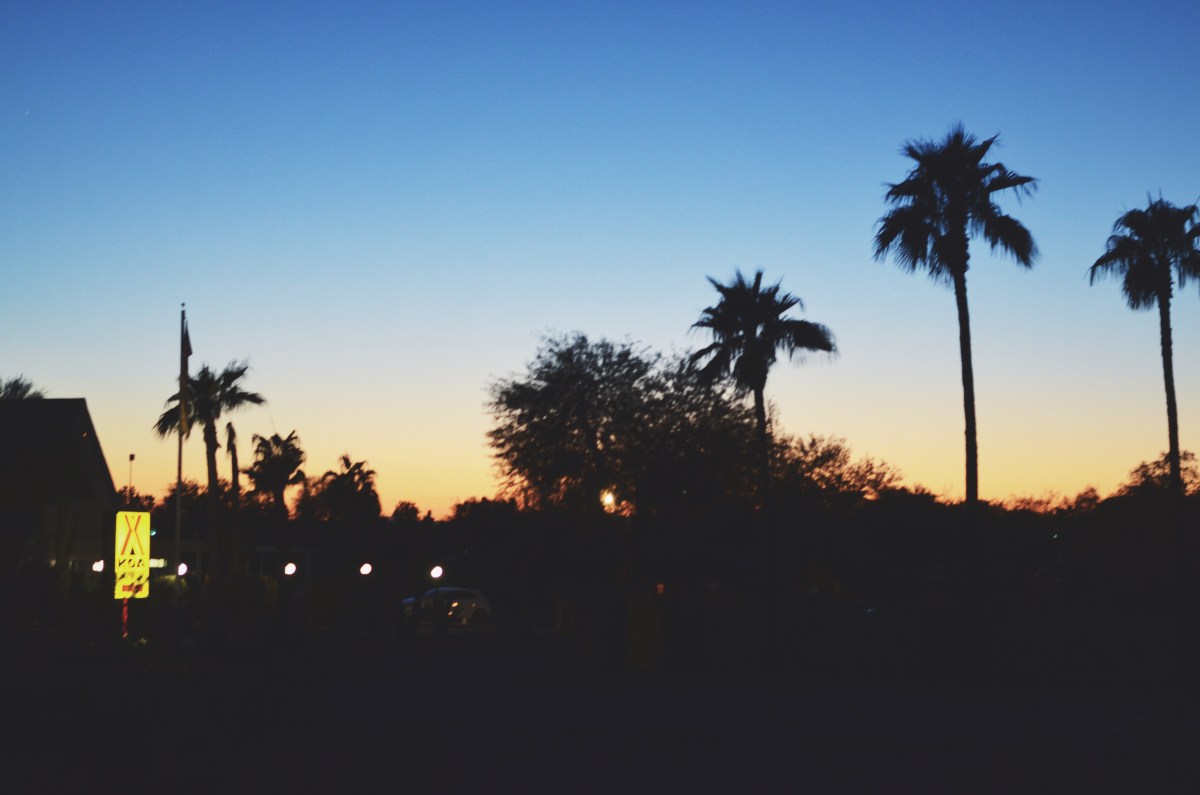 The night of the Super Moon at Apache Junction KOA.

Starbucks ended up being a dinky 9-seat pop-up shop inside of Frye’s—a heavily air-conditioned American grocery chain. It was uninspiring. There was fluorescent light. I felt overly disappointed in my daily workspace, fully prepared to sulk from my stool spot that overlooked the check-out registers, cashiers scanning party sized bags of pretzels and cases of Coca-Cola from afar.

I felt overly disappointed in my daily workspace, fully prepared to sulk from my stool spot that overlooked the check-out registers.

But a funny thing happened. I recognized I was moping, and gave myself a pep talk. You’re on an epic adventure making a living from the road! You’re in the desert! The world has put you here this morning, so embrace it, you suck. And that’s when I raised my gaze to see a tall, white-haired man buying a bag of ground coffee. I nudged Coleman. It was Darch Oborne, one of his parents’ best friends from British Columbia. I’d just met him for the first time earlier this summer. 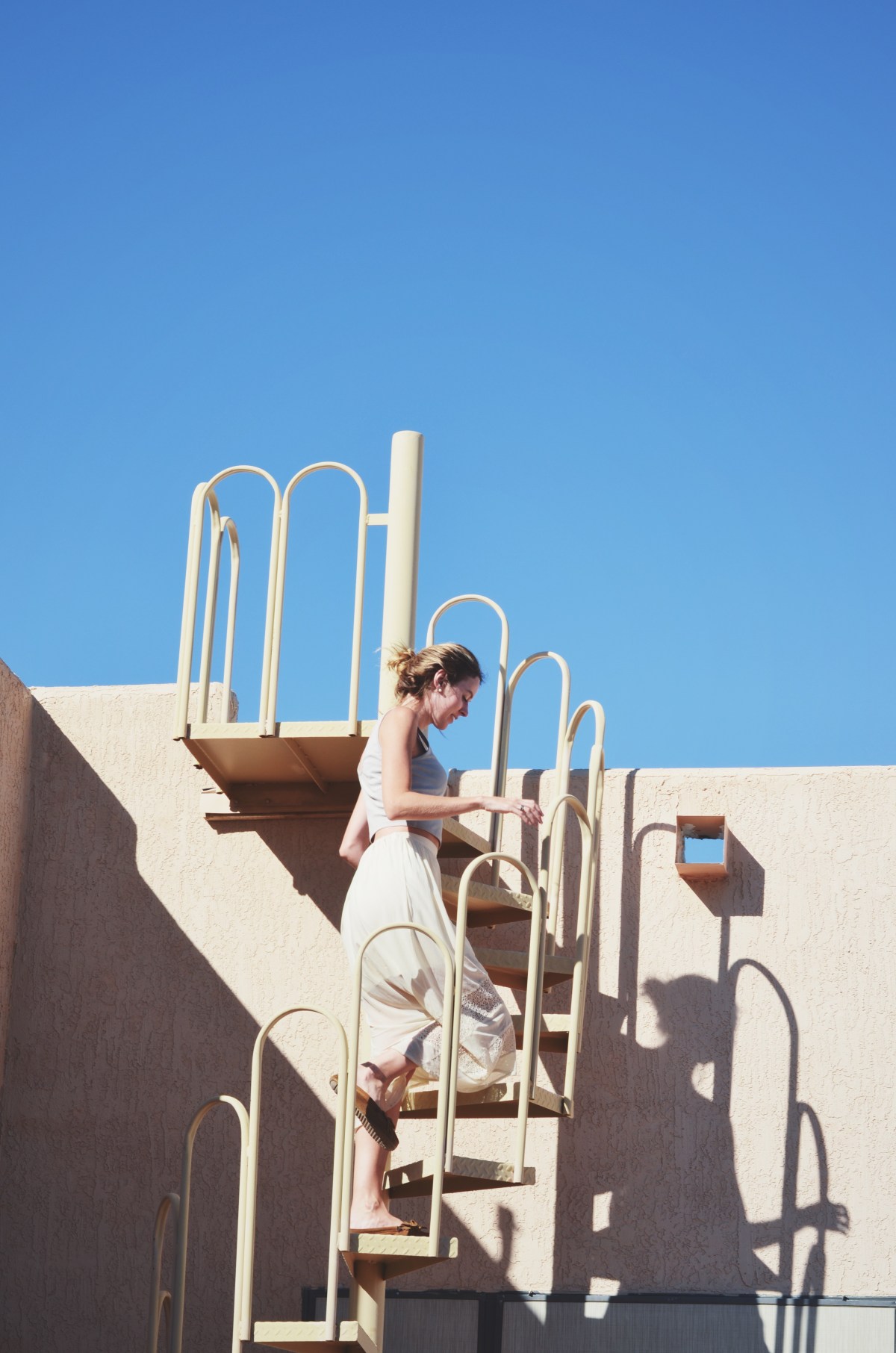 Walking up a staircase in Apache Junction, which is more symbolic than I realized at the time.

Out of all the places in Arizona we could have picked, and we’d oddly landed on the one spot where Darch and his wife Catherine spend their winters. Heck, Coleman’s parents would be here in just three weeks time for their vacation. Talk about serendipitous.

By Saturday morning, my heart was full. I felt accomplished.

So, we ended up staying longer than planned in Apache Junction. But was the most perfect accident. For one, I got a taste of mountain biking, exploring sandy desert trails, lined with saguaro and other prickly cactus with Darch and his pal Jaques—both retired and inspiringly fit. I conquering craggy terrain, ascending and descending hills that make my hands feel shaky just thinking about them. It was seriously exhilarating, despite my butt being too tender to sit for days following. I thrifted; I ran; I started a new (totally trashy Judy Bloom) book; I wrote in my journal; I meditated; I built a website; I filed multiple stories. I even found a newly renovated Starbucks—down the road from the gloomy one—with a sunshiny patio. In the evening, the four of us shared stories and bottles of Malbec over a gluten-free pasta dinner. 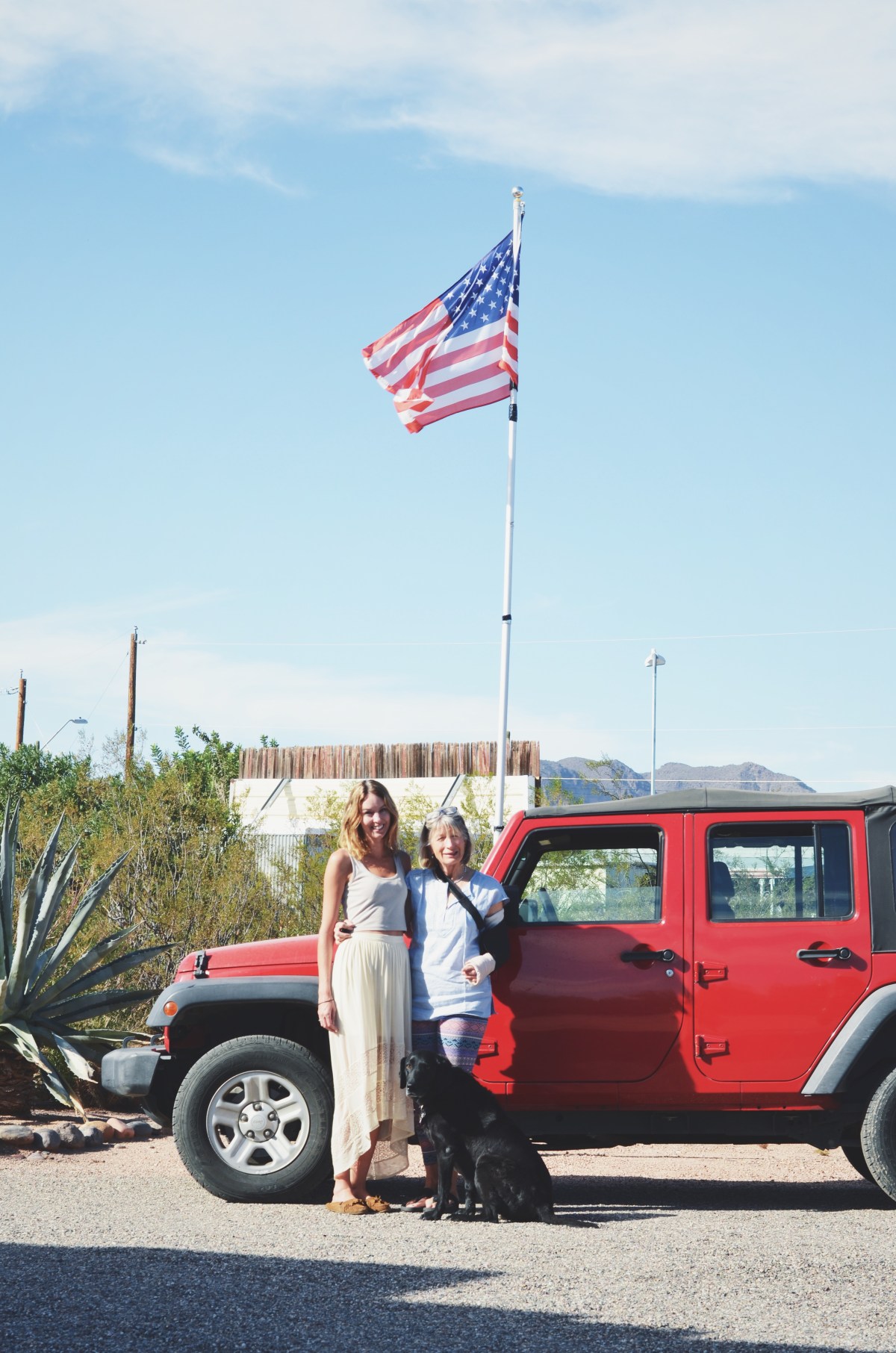 Catherine and me at their gem of a home. Oh, and Kiki, the dog.

I’d started the week feeling anxious, unsure, and lonely—Apache Junction, what a dumper. But by Saturday morning, my heart was full. I felt accomplished. And I actually ended up falling for the snowbird town. It’s an endless playground for anyone active, and The Handlebar makes a mean burger.

We’re passing Mesa now, closing in on Phoenix where we’ll head downtown to get our city fix. Truth: I love the nature, but I’m craving city energy. I even miss the walls of concrete. The red engine light just flicked on our dashboard as I’m typing. Super. And that fish smell? It’s still here. So, I just Googled “engine light fish smell,” and turns out it’s our van that reeks like a rolling seafood factory, not some stinky suburb. Yes, friends, our engine coolant may be leaking.

Turns out it’s our van that reeks like a rolling seafood factory, not some stinky suburb.

But if there’s anything I’ve learned from this past week, it’s that I’ve got to change my perspective. I need to embrace wherever I end up—like a grocery store Starbucks—or whatever happens—back to the mechanic, probably. My reality isn’t always a perfectly posed Instagram picture, but you know, I’m making a living from the road, adventuring with my partner in life and business. And that’s worth celebrating—probably over a glass of American whisky on the rocks when we arrive in Phoenix.