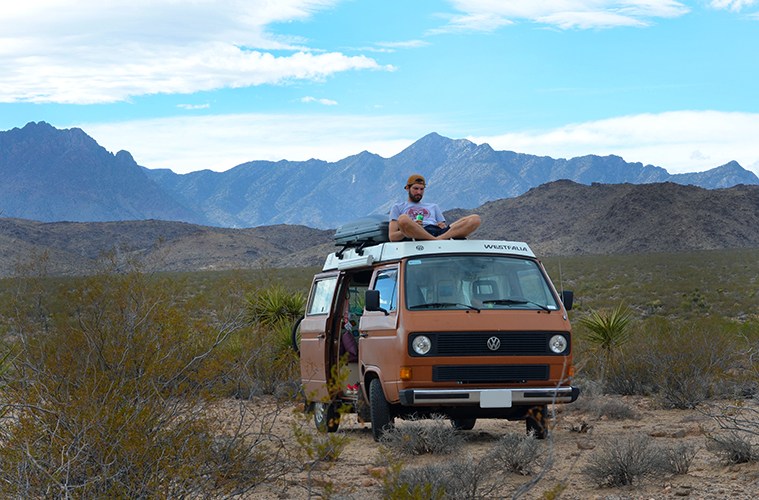 These long-drive days are tough.

Right now—sitting here in the passenger seat, second coffee of the day in hand, Lisa’s old pink iPod playing some Blink 182 spinoff band over our tinny speakers, the Arizona landscape, which reminds me of the interior of BC, streaming by my open window—it doesn’t seem so bad. In fact, at the moment, it’s pretty awesome.

But that’s the thing about long travel days. You get tired, you get emotional, and you have these insane highs and lows. As a pair (lovers, coworkers, roommates, best buds, take your pick), sharing the highs are great. Yesterday we took the afternoon and drove out into the Mojave National Preserve, ran and climbed around the caves and cliffs at the Hole in the Wall, and then had a beer in the middle of the desert, sitting on the roof of the van, tops off because we’re Canadian and the sun was out. The beer wasn’t even cold, or particularly tasty, but it was one of the best I’ve had since we left. That was a high.

Realizing that you have no clean dishes, you’re still smelly from the run you went on earlier, and that you’re going to be spending the second night in a row in the Walmart parking lot, was a low. I like Walmart, and the fact that they allow us to stay in their lots is absolutely amazing, but it’s not exactly the most inspiring place to wake up. Throw in a wifi or power issue and a couple deadlines, and you’ve got a stressful Monday morning.

Tonight we’re checking into a hotel in Sedona. Lisa has a gift certificate she won at a press event last year. I’m looking forward to the shower.

Leaving my shoes on until then,