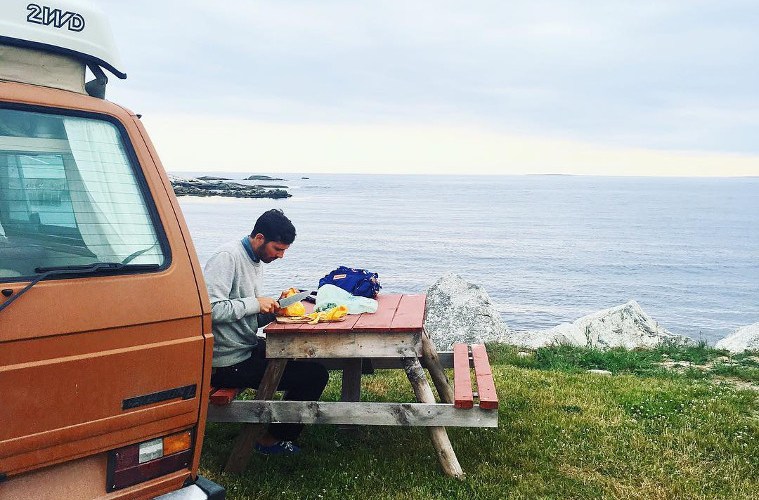 This post is from the archives, when we were just three months into our digital nomad lifestyle, but the words here are just as relevant today.

It’s been over three months since we moved into the van, launching our journey into digital nomadism. That’s three months of cooking on one burner (the second doesn’t work, and likely never will), doing dishes in a plastic bin, cramming socks and groceries into tiny cupboards, and endlessly searching for smooth Americano and steady wifi. True, we’ve had our share of stays in luxe hotels and the comfortable extra rooms of friends and family, but still, we’ve never traveled like this before.

I sometimes use the metaphor of surfing for what we do as digital nomads. It speaks to the literal movement involved, always forward and never backward. But it also works in another way. When I learned to surf in Australia as a broke backpacker, I was shocked and nearly drowned by the volatility of the waves. For me, being the mountain boy I am, the ocean was an unknown element, and being up on it, charging down the face of a wave—even just for a few feet, before crashing down and being tumbled beneath the surface like a load of laundry—was a rush like I’d never experienced. The knowledge that nobody would ever surf that same wave the way I had gave me a thrill I hadn’t expected.

Our work feels like that. When we’re up at 6 am hitting deadlines built on Toronto time; or setting up hotspots on our phones while we sit on park benches, editing and filing last-minute pieces for clients; or when we’re driving and chatting about an upcoming execution, kicking ideas around the “rolling writers’ room”—this is when I feel it.

We’re right on the crest of something. Sure, we’re not the very first, but we’re among them. We can see the others, around, behind and in front of us, setting up for the next swell, arms churning in the water, propelling them forward to catch the momentum. These are the pioneers, and we’re blessed to be among them.

Morning work sesh from the van before heading to the #CabotTrail. Type, Coleman, type!

But it’s nervous making at times, too, because it’s all so uncertain. The wave might break, or not. There might be a shark in there. Or maybe a jelly (hopefully not jellies). This is travel like I’ve never experienced.

When I was 17 I lived in Bordeaux, France for a year as a Rotary exchange student. It was a year of cultural education, adventure, and lots wine. After it was over, I felt almost French.

When I was 25 I backpacked around Southeast Asia and Australia. We stretched our budget, relaxed, partied plenty, I wrote a journal, and didn’t work for a second. I returned from that trip freshly motivated for the continuation of my post-secondary education.

After my university program was complete, I headed out again, this time exploring central America with a good friend. We drank and ate and spoke bad Spanish and played basketball with the locals for three months.

As the digital editor at a national men’s magazine, I was sent on all kinds of lavish press trips. Cognac in India, BMWs on F1 tracks in Portugal, wine tours in the Napa Valley, launch parties in Milan—my travel life looked, rather all of a sudden, like that of a Kardashian. But I’m not that. My butt is too flat.

This travel that we’re doing now, the digital nomad type, is nothing like any experience I’ve ever had on the road. It’s harder, more rewarding, and logistically confusing to most people, including myself.

The fact that, when I tell people that we’re living and travelling long-term in a van, their first reaction is to tell us how to make money—“Oh, you should sell bracelets!”—leads us to believe that few truly understand what it is to be a digital nomad.

The thing is, we never quit our jobs. We transitioned them, sure, but we’re still doing what we do. We’re writing. We’re just doing it from wherever. A campsite, a café, the ranger booth at a national park, my parent’s basement, the back seat of a 1983 Volkswagen Westfalia. We have money, we spend money, we’re not slowing down, and we’re have an insatiable appetitive for wifi.

There are plenty more of us on the way, too. We can see them in the watery horizon behind us, out there past the break.  And when they get here, we’ll be waiting to point them to where the wave breaks perfectly.

That’s the place to drop in, friends. The ride is spectacular.