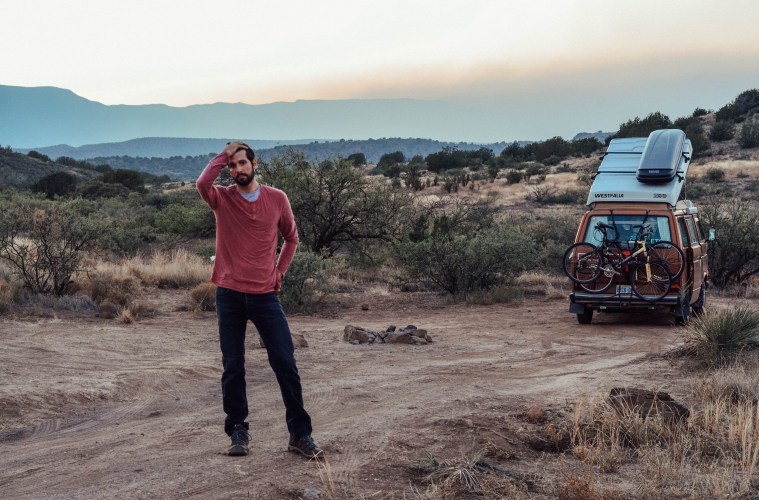 Parked in a Vancouver laneway, our van has turned into a crash pad for the homeless. This is not an invitation.

Our van has been broken into twice now on the streets of our new home, friendly Vancouver, Canada. Each time has left us–and we imagine our van–feeling violated. The first break-in happened when we were parked overnight in a notoriously “rough” neighbourhood; our friend whose place we were staying at suggested we remove anything valuable. We did.

In the morning, we walked up the tree-lined side street where we’d left our orange rig–in the daylight, it looked peaceful and serene. But, almost as expected, the passenger door was ajar; Coleman’s green and navy plaid scarf trailing out from the bottom, hanging limp like a flag signalling defeat. The glove box was wide also open, its already messy contents made even messier by a rushed thief. Was anything gone? A camping knife, Coleman noticed. Did the try and steal the tape deck? It kind of looked like it, but who uses tapes these days, anyway? (Other than nostalgic Westfalia owners, obv.)

Worse than the missing knife, however, was the fact that someone had gotten into the van and then poked around our home in the dead of night.

We vowed never to park in this area again and thought break-ins were behind us.

But eight weeks later, another one. We’d travelled across North America three times and never had anyone mess with our stuff, not once. But something about our orange abode must look welcoming to west coast folk with stick fingers.

The second break-in was much more strange and unsettling. We were parked in a “better” neighbourhood this time, under a bright street lamp with apartment units facing towards it in every direction. Safe, we thought.

The second break-in was much more strange and unsettling.

On a recent Sunday afternoon, I went out to our van to grab a pair of pliers only to discover the passenger door was unlocked. Strange, I thought. Had I forgotten to lock when I was here last? I did a quick scan around the front two seats and nothing looked out of place. I called Coleman to ask if perhaps he’d been in the van and forgotten to lock up. He hadn’t, but he told me to double check that nothing was missing.

I went to unlock the side sliding door to see if anything was going and it too was open. But nothing looked off. That was until I looked into the very back of the van, behind the bench seat. There was a stack of dark green foam sleeping pads neatly stacked on top of one another.

Now, this next bit of information is an important piece to this story: we don’t own dark green foam sleeping pads. A few of our belongings–a cloth cat carrier and a hand-knit blanket–had been carefully placed on top of this stack of random foam rectangles.

I immediately hit redial on my phone, calling Coleman to ask if, maybe, just maybe, he’d put these strange sleeping pads into the van and forgotten to tell me.

Someone had been inside of our van, again, and not only that, they had moved in a variety of foam pads into the sleeping quarters of our rolling home. And apparently stayed the night. I could see a smudge on the back window the greasy van crasher had wiped away the condensation, a move I’d done myself countless times in order to wipe the window clean and get a peek outside. I became suddenly aware of the unfamiliar odour at that point, as well. It was sour.

Someone had been inside of our van, and not only that, they had moved in a variety of foam pads into the sleeping quarters of our rolling home.

I removed the pads, unsure of whether I should place them in a garbage bag and leave a note for the person, or trash them and put an immediate end to the situation. Coleman convinced me that the latter was the right choice. “What about bed bugs?” Good point. Still, I felt guilty. Someone had violated my personal space, yes, but they must’ve been desperate for a dry, cozy space to sleep for the night.

Once the pads were gone, I felt slightly less creeped out. But that feeling was fleeting because I then discovered more items that were very much not ours. Neatly folded and placed into the cabinetry above the back bench seat were two sets of sheets. Sheets! Someone had moved in their linens in, too! It was all so tidy, which made the whole situation even more bizarre.

The days following this second breaking, we checked on the van throughout the night. No one came back. Or at least they didn’t make us aware of their return. It was more unsettling to know a person (or people) had come by with foam mattresses (which fit so perfectly, also weird) and sheets (white and silver Christmas snowflake pattern) and moved them into our rig with no intention of coming back.

I’ve tried to imagine them breaking in and setting up their bedroom (inside of my bedroom) for the night. I laugh visualizing someone opening and closing the the clunky, loud sliding door. It’s all too weird.

I’m thankful that this stranger was considerate of our space and didn’t do something horrendous (you know, like Dirty Mike and Boys) and that they had a safe quiet place to sleep. But I almost wish they’d taken their belongings with them and left no trace at all. They say ignorance is bliss, and I think this time they might be right.

The whole thing went down on Instagram Stories, which you can watch here: