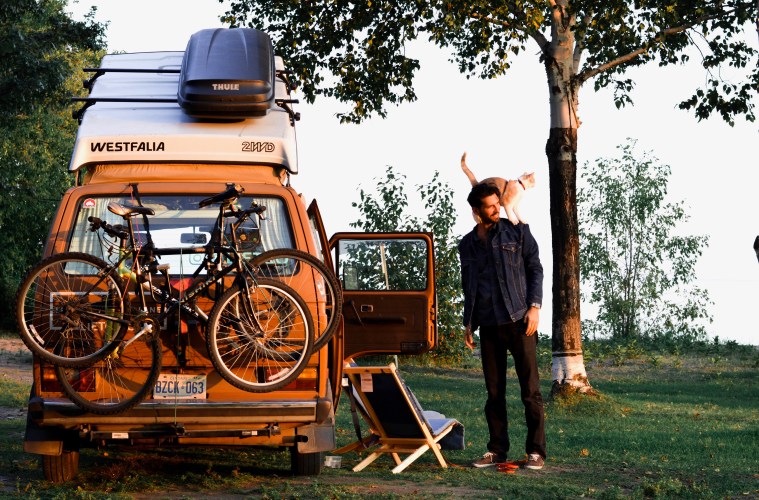 Before we had reached Stouffville, the very first stop on our way to British Columbia from Toronto this fall, the cat had defecated twice. Shit, I mean. He’d shit twice.

Our efforts to get Mewan McGregor (he came with the name, I swear) used to driving seemed useless. Over the summer, we’d spent afternoons working or eating in the van, his red leash tied to the rear seat handle or the door frame while he explored all corners and cubbies, inside and out. We even slept in it a few times. After an hour of pawing at the windows, he’d settle down between us and sleep, just like a comfortable, well-adjusted cat should.

No, he didn’t mind the van so much when it was parked. It was the whole movement thing that had a laxative effect, because every time we’d take a short drive around the city, he’d arch his back in fear and drop a turd. And his normal consistency with the litter box, one of his best qualities, went out the window at anything over 15 kph. When we braked too hard, or turned to sharply, or heaven forbid a motorcycle drove by, he’d go on the floor, in his cat carrier, on Lisa, wherever. 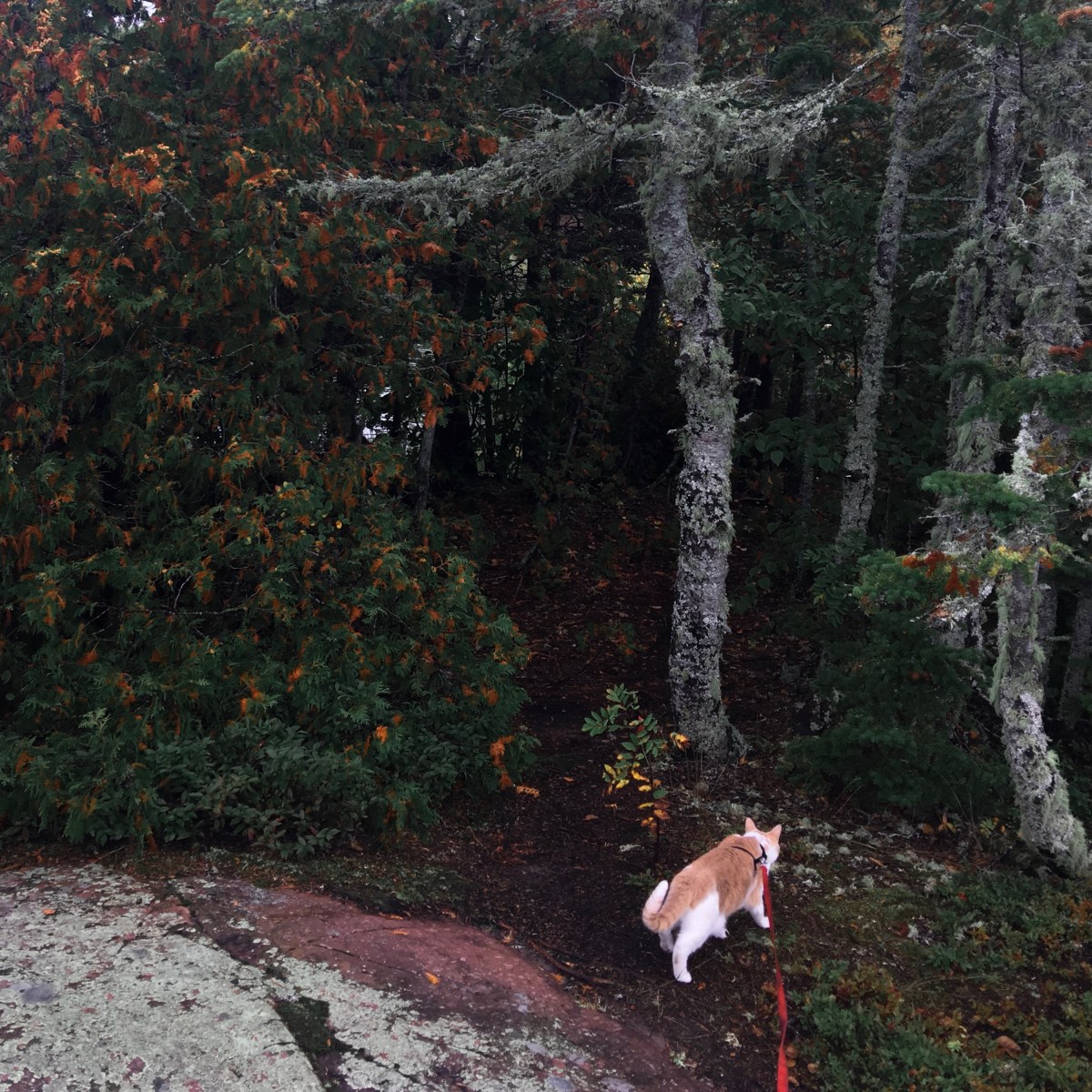 It was with this sense of defeat on our minds and the smell of cat shit in the air that we pulled into Stouffville. We’d picked up a large crate, medium dog size, and lined it with paper, putting his litter box into the back corner. The turd was on the paper beside it.

“It’s going to be a long ways across the country,” we thought. How the heck are we going to travel with a cat.

But as many questionable therapists will tell you, sometimes flooding is the only way to get over your fears. Because after a few days of steady but immobile vanliving in Lisa’s parent’s driveway, Mewan was starting to act like he belonged. He’d found a few spots he liked, mostly beside the open windows, and was hitting the litter-box with his normal accuracy. 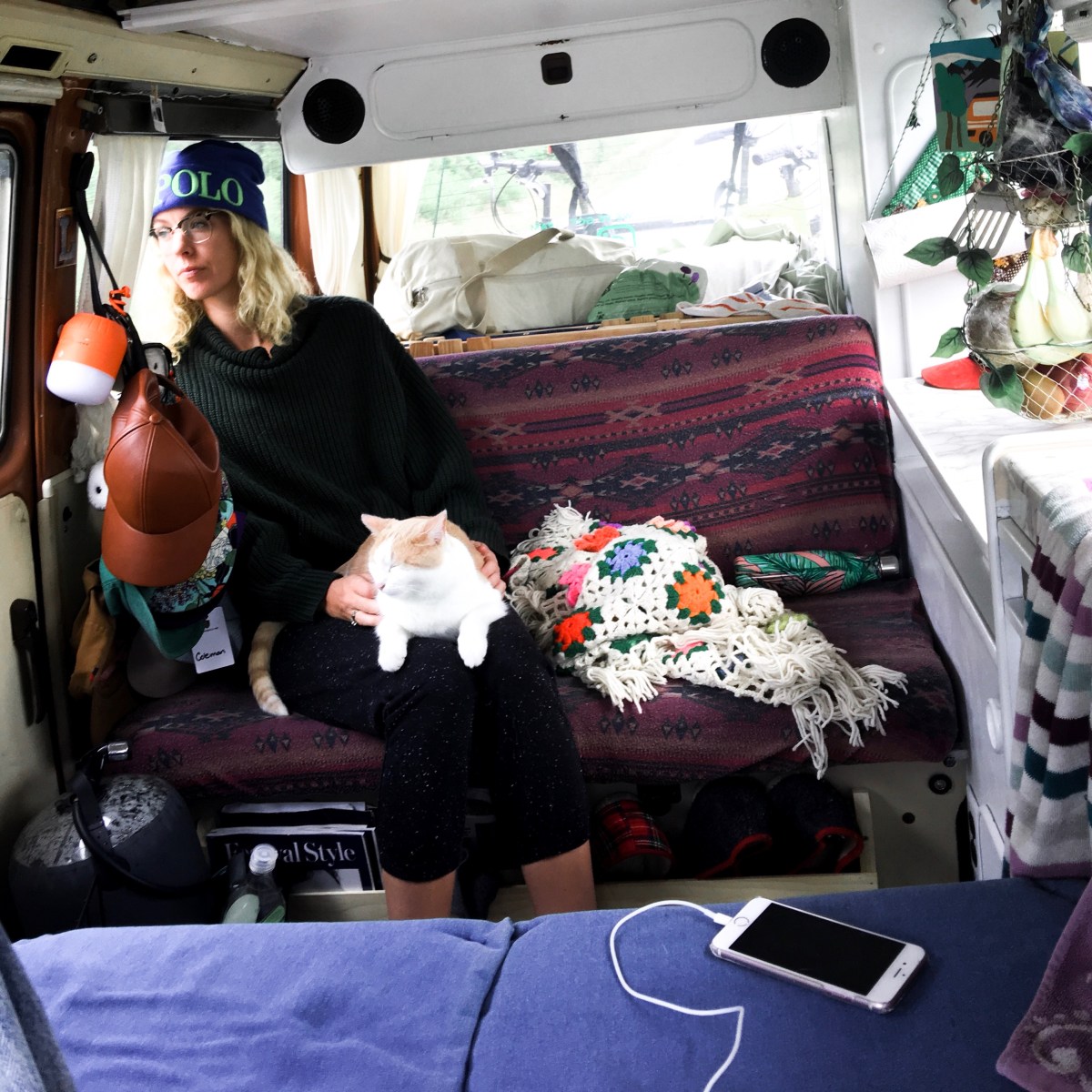 The true test came when we set out for the longer haul toward Barrie and beyond. The van was packed with all of our belongings, including three massive bags of stuff we planned to ship to BC via Greyhound (my father who picked them up at the other end last week called them “shoulder dislocators”). Mewan’s metal crate was sandwiched between them, lined with clean paper and fresh litter in the box.

About 15 minutes down the road he let out a yowl and Lisa turned around to check. He was nosed into the corner, his body curled up in a pathetic catball with his tail tucked neatly underneath, looking mighty miserable, but there was no mess. Half an hour later, another yowl, another dejected position, but still nothing.

By the time we got to the Greyhound station in Barrie, it had been over an hour, making it the longest trip Mewan had ever been on. When we opened his crate door he stepped out with his tail in the air, a happy cat once more. Behind him in his cage, the entertainment section of the previous Sunday’s Toronto Star remained unsullied and the litter box was empty. Finally, progress. 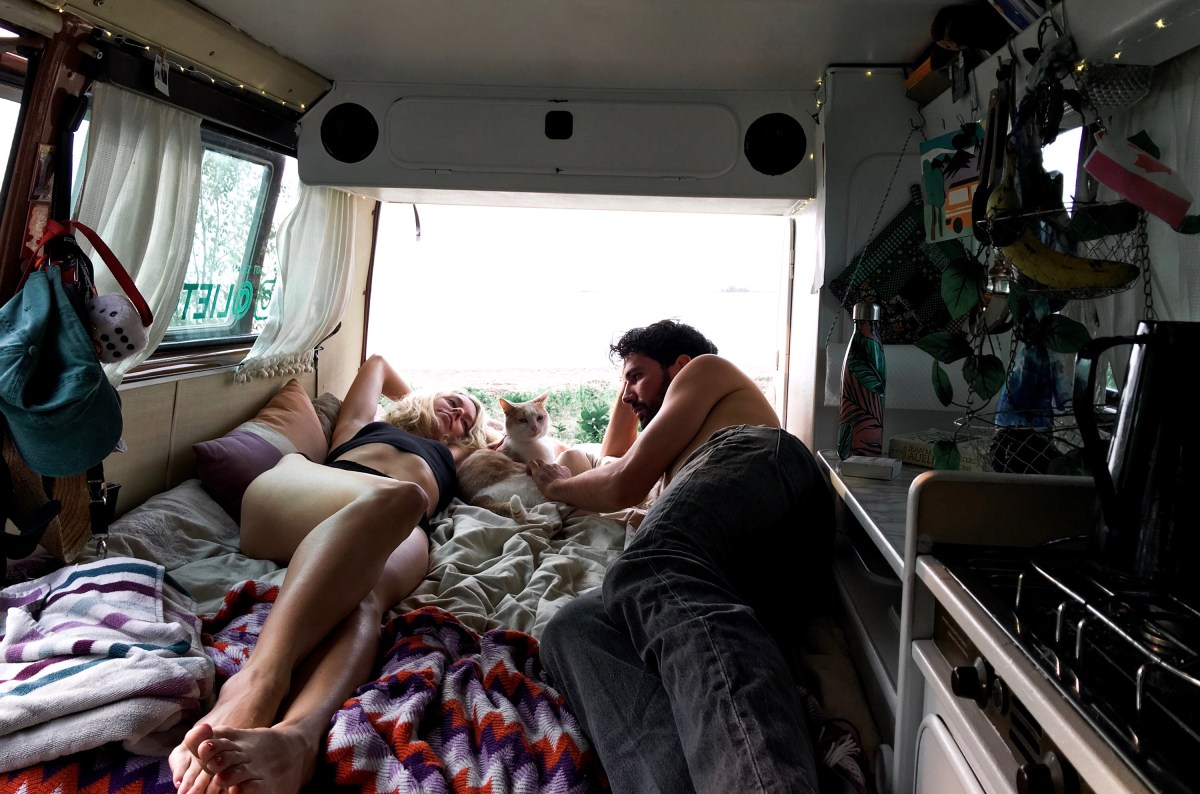 With the shoulder dislocators out of the way and having taken Mewan for a little walk on his leash in downtown Barrie—walking a cat on a leash is GREAT way to make friends, btw—we set off toward our first campsite, a little pull-out beside a damn on a river, which we’d lined up on freecampsites.net.

That night we ate pasta sitting in our folding chairs and watched a fisherman cast his line into the mouth of the river—a postcard start to our cross-country trek. Mewan, having used his litter sometime after we’d arrived, sat on my lap like a happy, well-adjusted cat should. Maybe travel with a cat isn’t so hard after all.

Just a man in a van down by the river…with his cat.

It’s been a little over a week and Mewan has yet to have any turd issues. This morning he chased a chipmunk, got his leash tangled in some tree roots, got chased by two dogs, and ate many flies in Sleeping Giant Provincial Park in Northern Ontario. He no longer uses his crate when we’re on the move; instead, he roams free throughout the van, moving between his favourite spots. As far as we can tell, he loves his new vanlife.