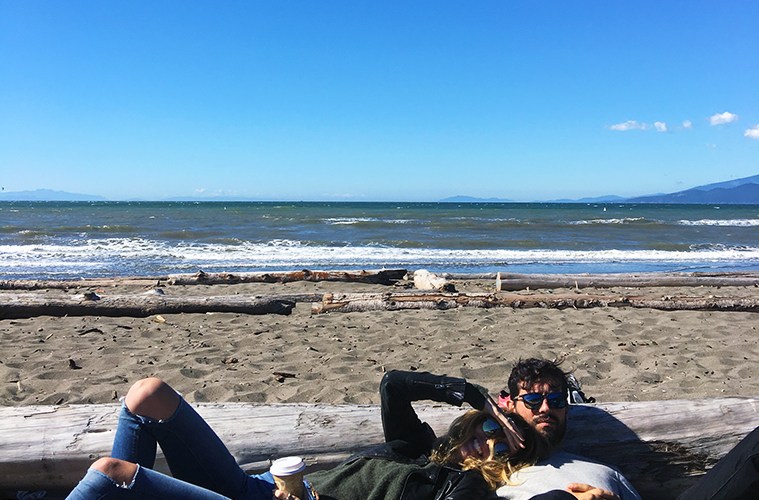 Our legs hurt, our fingers are on fire, and our livers need a break after the week we’ve had.

We’ve been WFV (Work from Vancouver) for the last seven days, and it’s feeling pretty homey, homie. Here’s what we did, saw, ate, wrote, and thought this week.

Entered and won a Rock Paper Scissor competition in Gastown.

One of our best friends was in town, and after hopping between The Cambie (which is Vancouver’s oldest bar), and Alibi Room, we wandered by The Portside, a cozy pub that had a chalkboard sign out front advertising a Rock Paper Scissor tournament. I knew my RPS skills were above average (and so did Coleman, who loses frequently when we play, and ends up doing all the laundry and all the dishes), so we entered. After making it through five rounds, I beat out a delightful gent from Lunenburg, NS in the finals, and took home first prize (a pint and $50!).

The seaside trails that wind along Vancouver’s coast are like no other. On Thursday, we went for an epic bike ride that took us through Granville Island, Kitsalino Beach, Jerico Beach, the UBC campus, and over to Wreck Beach where we bought refreshments from a dude selling steaming cups of joe and samosas on the beach.

Ditched our four-wheeled friend for a pair of two-wheelers. We biked a good 11km today through #GranvilleIsland and passed #Kits Beach, all along the awesome seaside trail today. What a glorious, and much-needed break from the work week/weekend we’ve had.

Wrote about the affects of daylight and sex drive; an awesome new product line by Rethink Breast Cancer.

Our fingers were on fire as per usual as we penned a handful of stories, including a piece on light therapy and the affect it has on sex drive; a seriously awesome and witty new product line by Rethink Breast Cancer for women battling the disease; 14 must-visit scenic waterfront restaurants in Canada; and H&M’s autumn ad campaign which is generating all sorts of buzz.

Discovered the nerdiest  bar in Vancouver.

The Storm Crow Tavern is an over-the-top tribute Star Wars. We didn’t get that its name is a joke. And, no, we still don’t fully understand it. But the decor is impressive, and the super fans were clearly in their happy place.

Accidentally ended up at the “nerdiest bar in Vancouver, maybe even the country,” according to our charming tender. pic.twitter.com/DmgRvYCdz6

Shouted from the rooftops about our all-star private charter aircraft client.

We may live in a van, but one of our Li et Co Media clients is Eclipse Charter Air, and we think everyone should get to know Yasmin Alam, the female entrepreneur who is spearheading change in the world of Canadian private aviation. This week, we sent out a press release announcing Eclipse’s arrival.

Toasted to Fairmont Pac Rim and Hermes, sipped all the cognac and champagne.

Tuesday night was a throwback to our former lives of event hopping from one luxury brand’s party to another, and we remembered exactly how to do it.

So it’s been about five months since we’ve left our glam jobs in Toronto, but tonight we’re back at it, this time on the west coast, and it feels so right. What a pleasure celebrating @fairmontpacific’s new designation with #LouisXIII.

And Hermes at Work, a free, five day long exhibition which shows the meticulous craftsmanship behind its goods, kicked off at Canada Place. The artisan making the silk-screen printed scarves even gave us silk worm cocoon. Will this thing hatch? We’re not sure, but we’ll update on social media if it does.

Hermes, Rihanna, us, we’ve all gotta work, work, work, work, work this year. But that doesn’t mean we can’t have fun at the same time. That’s what #Lietco is all about. If you’re in #Vancouver, go check out the #HermesArtisan exhibition (free for all!) on the waterfront. It. Is. Awesome.

Ate the most delicious Mexican on West 4th.

Everything about Las Margaritas, a delightful little Mexican restaurant in the West 4th hood, was A++. From the sunny patio to the $5 menu during Fiesta hour (2:30 – 5:30, Monday – Friday) to the seriously Mexican dude who sat us to the fast wifi, this was one of our fav spots we worked from this week.

This is what Coleman’s face does when we find a Mexican restaurant that has a sunny patio, delicious $5 happy hour eats, and fast wifi. WFP (work from patio), if you need us 😬

Us: nestled at a cozy patio table at Arbutus Coffee. Him: walking leisurely along the street.

Saw #KevinBacon on the street in #yvr and immediately felt bad about never having seen Footloose.