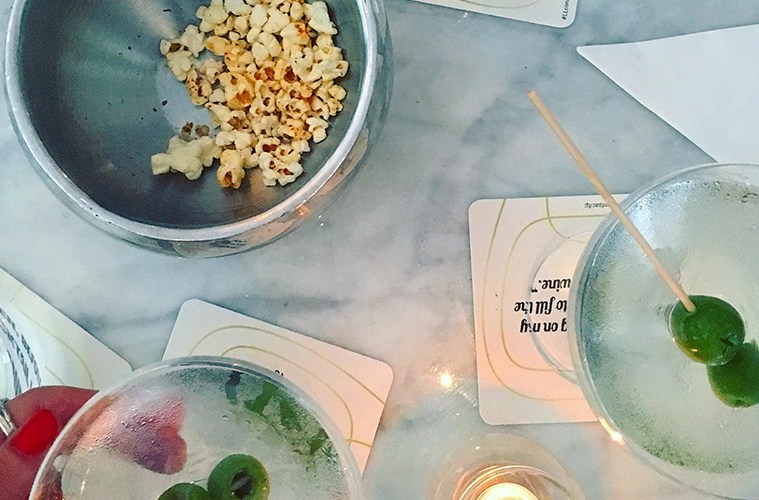 If there’s one spot you have  drink at in Vancouver, hands down, it’s the Fairmont Pacific Rim.

There’s a whole lot of luxury in Vancouver. You can feel it when you walk along Robson Street, passing by the Dior boutique on Georgia and the playful Hermès windows on Burrard; and you can see in the R8s and Aston Martins that cruise along the cobblestone streets in Gastown.

But the best way to experience luxury in Vancouver is to taste it.

Handcrafted cocktails are aplenty at The Lobby Lounge and RawBar tucked street level inside the Fairmont Pacific Rim. Seriously, they have a leather-bound booked filled with creative concoctions (some that rotate seasonally, and others that are staples) in addition to glasses of bubbles, and rare blends of Scotch, like The Balvenie. Its 50-year-old single malt Scotch whiskey is only served in Canada at Fairmont Pacific Rim. Pretty impressive, huh? While Coleman and I are both Scotch drinkers, a one ounce pour has a price tag of $2,600, so we just imagined what two thousand and a half dollars must taste like.

Instead, I picked a Japanese-like martini, which was a mix of sake and gin and vermouth. If luxury had a flavour, I’m pretty sure it’d be that concoction. Coleman, in true writer’s form, ordered the Sun Also Rises, a tequila- and rum- based ode to Hemingway, served with a salted rim and an orange zest. Manly and sweet… just like Coleman.

But what sets the Fairmont Pac Rim’s lobby bar above other luxury hotel’s bars, is the fact that the public actually goes there to party. Live music performances by local artists happen up to three times a day, and a sleek marble wall that’s outfitted with a fireplace divides the bar from the main lobby entrance. But in all its luxury, it’s got none of the pretentiousness. This is true luxury in 2016. The staff are dressed as if they’re attending a black tie gala, the women in floor-length gowns and men in perfectly tailored suits. It’s like being at some grand party–even if it’s just a party for two.

Oh, and if you suddenly find that you’ve had one too many (which, yeah, it’s totally easy to lose track of time in here), check into a room upstairs. The bathrooms alone are worth a night’s stay.