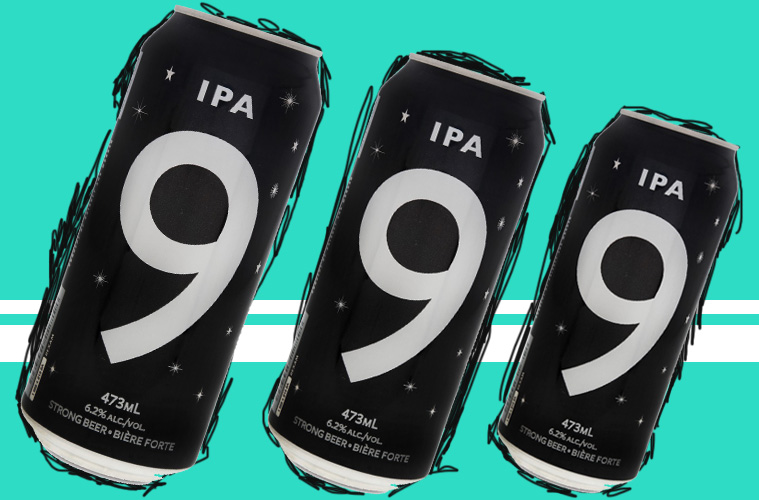 Toronto’s Parkdale neighbourhood is so hip your belt will morph into suspenders while you’re wearing it. Seriously, you will be infected with the Hip…and you’ll probably like it.

Duggan’s Brewery, right in the heart of the Hipster Hood on Queen Street, is a relatively new player, but their No. 9 IPA is no stranger to those who seek out the Ontarian option among the beer taps.

The Duggan’s Brewery No. 9 IPA can is awesome. It’s mysterious, and makes you want to drink its contents, regardless of what’s inside. (Let’s be honest, we’ll drink anything.)

Here’s how it goes down:

A couple months ago I started this fun little project combining something that I love and something that I do because I don’t want to stink. Check out my first ever #ShowerBeerReview of the Concept IPA 9 from @duggansbreweryparkdale ???????? “Ever wondered what the desire to wear jean shorts tastes like? We’ve got the answer. Duggans Brewery Concept IPA 9: 8.5/10.”

The Package: The mystery in the packaging here is palpable. You can practically hear the can ask itself: “What’s in me? What do I taste like? Who. Am. I?” We say, why not name a beer a number? Honestly, the whole reason this made it into the shower with me was because of this awesome can. I saw it, and had to know. 4.8/5

The Pour: Slips from the bottle in a smoky brown, quickly forming a medium head in an egg-shell (free-range, naturally) colour. Dissipates pretty quickly and settles into a film. 3/5

The Nose: Like lemons growing in a pine forest, which we’re pretty sure wouldn’t happen, but we embrace nonetheless. 7.5/10

The Taste: There’s something to be said for a nice, balanced ale, and we should say that something right now about this one because nicely balanced it is. Some insist it’s “weak,” but I’m a glass half full of good beer kind of guy and I find it palatable enough. Also: malty, dry, creamy (homo milk creamy) and slightly piney, with a hoppy grapefruit finish. 7/10

The Marketing: This is a young player in an established dressing room full of larger, older players, so, while we’re not jazzed on their brewery experience (aside from the awesome location), we’re willing to give them credit for coming out of the gate at speed. They’re not going to win an award for their digital marketing (call us, Duggan’s!), but their Instagram account should give you a decent look at the local weather, and their labels are clean. 7/10

Overall: I wouldn’t kick it out of the shower, but I’m not going to let it use my toothbrush or anything. Still, a welcome guest in the door of our fridge. Will purchase again.  7/10