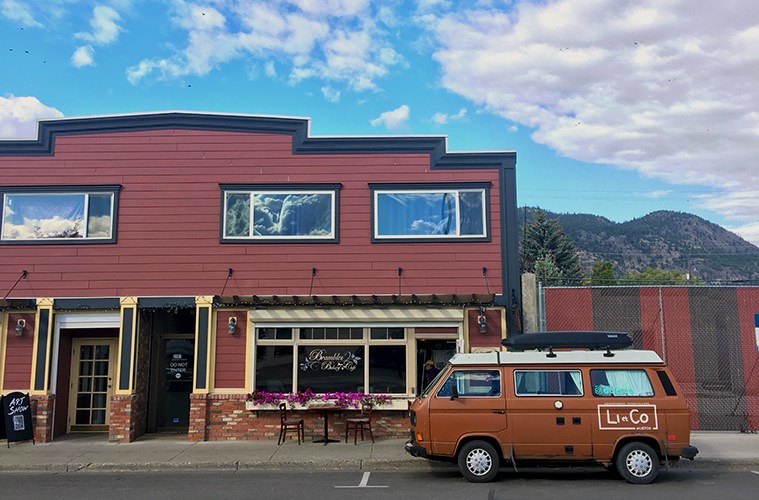 I’ve been a coffee guy for some time now. I don’t remember exactly when I developed a taste for Americanos—probably when I moved to Toronto—but there’s published evidence of my shameful predilection for large Tim Hortons dark roasts with 1 cream and 2 sugars, which I ordered daily at university in 2011. I date myself.

Speaking of dates, I’ve recently discovered that 49th Parallel Coffee Roasters in Vancouver makes the most delightful almond milk with date juice. It goes perfectly with their Americano and one of their house-made, gourmet doughnuts.

OK, so dieting can be a struggle when your office for the day always smells of croissants and crullers (called that for a reason)—and we just spent a month and a half at Brambles Bakery & Cafe, the best bakery in Canada, hands down, bias aside (or not so much aside)! I may or may not be carrying around a few extra tasty sandwiches and sausage rolls on my tummy thanks to that magical, tasty place.

The point of these ramblings is that I love coffee, I love coffee shops, and I’m slightly fat at the moment. Deal with it.

What are we doing in so many coffee shops? Drinking coffee, of course. And writing. Always writing. Coffee is writing fuel. In fact, these words are being plucked from my keyboard from a cool vintage sofa at the back of In the Beantime in Ladysmith, on Vancouver Island. Indeed, there are no shortage of pun-based coffee shops. This is not a judgement; we have several printed on our van.

And as an appreciator of great coffee shops (and bad puns), I’ve been treated again and again to amazing experiences in cities across the country, from Fredericton, NB, to Nanaimo, BC, as we travelled the country this summer.

I’m sure that we haven’t visited half of the great cafes, even in the cities we’ve been to. But still, I like to think we’ve learned a thing or two about the state of the Canadian coffee shop during our last five months of travel.

Here are some of these lessons, brought to life by some of the most memorable Canadian coffee houses we frequented this summer.

I’d say 90 per cent of coffee shops with espresso machines have wifi. Yes, I did just pull that stat from my BS generator (that’s my brain), but feel free to spread it around. Big win for the digital nomads.

Drinking coffee, writing about the healthy state of the Canadian #coffee shop in a coffee shop. @cammac1010 #cafe pic.twitter.com/s3ehTvNzOW

Walk into any cafe and count the Macbooks. There are probably at least half as many as there are people. OK, so that’s another BS stat. Still, I’ve seen orchards with fewer apples. But it’s not just the independent digital nomads and freelancers using these new-aged offices. In bigger cities like Toronto, Halifax, and Vancouver, we saw staff meetings, interviews, and even disciplinary meetings. Not saying that’s cool—with the other guests or the management—but that’s the way it is.

On our way to recuperate our van. But first, a little #digitalnomad shift in #MahoneBay. pic.twitter.com/sWdz1Dm9f6

You can tell a lot about a city by its most popular coffee shop. Ten years ago, the downtown cores of small to medium size cities were really struggling. Something, in my really quite uninformed opinion, has shifted. Main Street is starting to draw the tourists in off the highway again, and the residents also seem to be more into the “local” scene. The downtown cafes are frequently the backbone of this scene, offering visitors and locals alike a chance to take in the culture while they sip. Often, they’re selling local wares and fares, too, like fresh produce and meat, and crafts and art.

If you’re looking for us, we’re probably at @bramblesbakery, eating all the gluten-free sweets and drinking all the americanos.

Tipping for coffee is a thing now. A good thing.

Both Lisa and I worked service jobs through university and beyond, so we have great respect for the practice of tipping. You’ve probably noticed that most independent coffee stops don’t offer tap anymore, and that you’re being prompted for a tip when you pay by credit or debit. This is the new norm. And really, why should you tip the hipster that serves you a shot of Jameson 15 per cent while the hipster who artfully finishes your latte gets nothing? Besides, you can definitely afford 15 per cent on $3.50.

The fight for seating is real

In the real touristy or trendy spots, there’s often no place to sit. There are chairs, but they all have butts in them. For business owners, there isn’t a better problem to have. Some places even limit “Internet time” (we get it, honestly), or block the outlets in the wall so laptop workers like us are limited to one charge. To this we say, “Good for you, and we’ll see you at 2:30pm when everyone else is back at their office.”